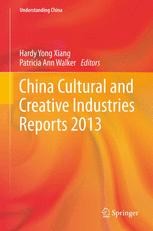 This collection provides access to up to date, very high quality research and critical perspectives on China’s CCIs on an industry by industry basis.  Industries dealt with by this collection include: advertising, architecture, art and antiques, computer games, crafts, design, designer fashion, film and video, music, performing arts, publishing, software, TV and radio, digital media.  The collection combines recently translated work by acknowledged experts on individual sectors of the creative industries from within China with more critical work by internationally-based experts on China’s CCIs and their implications beyond China. The collection draws on the expertise of research academics and of industry based practitioners. China’s Creative and Cultural Industries Reports  is a Lens on China providing fresh, new material and perspectives on a key area of cultural and economic development in one of the world’s fastest growing economies. Publication in the form of a collection, which could be sold in multiple of traditional and digital formats, either as a volume or as individual reports, makes it possible for readers to select the format most relevant to their interests.  ​

Dr. Yong Xiang (Hardy) is an Associate Professor and Vice Dean of the School of Arts at Peking University and Vice Dean of the Institute for Cultural Industries at Peking University (ICIPKU), where he is working on a Creativity and Management project. He joined the PKU cultural industries research group in 2003. He gained his Ph.D. (2009) in Management at the School of Government, PKU for work on The Research on the Competency Model of Creative Managers in Chinese Cultural Industries. He gained his MA in Arts Administration at School of Arts (2003), PKU and his BA in Philosophy (Major,2000), Economics (Minor,2000), Department of Philosophy & China Centre for Economics Research (CCER), PKU. Since 2005, he has taught the courses, Studies on the Management of Creativity, Strategy and Management of Culture Industries etc. at the School of Arts, PKU. His academic interests are focusing on cultural & creative industries, management of the art, culture and creativity, and human resource development & management.

He is a senior cultural & creative industries (CCI) consultant to government, companies and institutions in China. He was awarded one of the 2012 ‘Top 10 Excellent Scholars’ of CCI in China.Patricia Walker is an Associate Professor, Honorary Researcher at Institute for Cultural Industries, Peking University and senior research fellow in the Global Policy Institute, London.

Her work life ethos is based on partnership to best enable outstanding impacts by working with others who share that joint ambition and belief.

As an international entrepreneur and academic she has founded and delivered high profile collaborations between industry and academia, including the IBM Smarter Planet Academic Initiative Lab, London Business Dialogues, Cuba 2020 Vision, the Edu Tourism Study programmes between China and UK. In partnership with Lord Wei she was instrumental in creating the award winning Anglo Sino Enterprise Challenge for Global Entrepreneur Week UK 2011. She was a regular reviewer of business publications for international publishers.

Her roles as a catalyst, thought leader and advisor with governments, academia and industry of CCI countries span Europe, Cuba, Caribbean, Romania, Russia and China.

In 2010 she established the first CCI showcase for London www.iaci-symposium.org of world experts and is a joint founder with Yong Xiang of the International Association of Culture and Creative Industries (IACCI).

Voluntary roles include a Chancellor of the Children’s University and a Chair of the Careers Academy UK.

Chen Gang, Doctoral tutor and Associate Dean of the School of Communications and Journalism, Peking University.