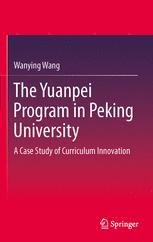 The Yuanpei Program in Peking University

A Case Study of Curriculum Innovation

The Yuanpei program is an institution wide curriculum innovation, modeling on the core curriculum in Harvard which is committed to carrying out general education. This research investigated the major conflicts that arose in the process of initiation and implementation of the Yuanpei program, how these conflicts evolved during the process, and what were the sources of these conflicts. The conflict model, primarily derived from conflict theory, was adopted to interpret and analyze the process of curriculum innovation in this context. The study employed a qualitative case study approach. Data were collected primarily through interviews, observations and document analysis. The administrators, teachers and students were interviewed to gain insight into major conflicts arose, their processes and sources in process of the curriculum innovation. The researcher primarily observed program practices and operations, including program setting, the human, social environment (how participants interact and communicate), and program activities and participant behaviors. The researcher distinguished between conceptual conflicts and practical conflict in light of the different stages in which conflicts emerged. The researcher mainly identified three conceptual conflicts that represent the focus of debates: first, the two opposing opinions on how to balance between general education and specialized education; second, potential incongruence in the idea of the Yuanpei program; third, conflict between the changing need of society and traditional system of training. The researcher summarized four categories of practical conflicts in light of various issues: free-course selection, free-major selection, faculty advisor as well as general education elective courses, in each of which sub-themes were identified and analyzed. The researcher described how both conceptual and practical conflicts evolved. Each major conceptual conflict seems to go through similar stages based on the data, involving issue, confrontation and integration of claims of both sides. For practical conflicts, factors contributing to the escalation and de-escalation, moderation of conflicts were found by the researcher. The research identified different roles, incompatible values, contested resources and structural constraints as the main sources of conflict. Any conflict may involve more than one category or may be mainly due to one category. As such, the study is exploratory and contributes to the scholarship on educational change through its analysis of the curriculum innovation for general education in Peking University.