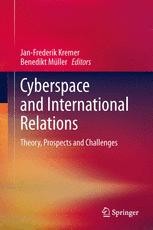 Cyberspace is everywhere in today’s world and has significant implications not only for global economic activity, but also for international politics and transnational social relations. This compilation addresses for the first time the “cyberization” of international relations - the growing dependence of actors in IR on the infrastructure and instruments of the internet, and the penetration of cyberspace into all fields of their activities. The volume approaches this topical issue in a comprehensive and interdisciplinary fashion, bringing together scholars from disciplines such as IR, security studies, ICT studies and philosophy as well as experts from everyday cyber-practice.

In the first part, concepts and theories are presented to shed light on the relationship between cyberspace and international relations, discussing implications for the discipline and presenting fresh and innovative theoretical approaches.

Jan-Frederik Kremer heads the research group “Economy and Finance” at the Center for Global Studies, University of Bonn, where he works as research fellow and lecturer. He studied Political Science, History, Economics and Philosophy at the Ruhr University Bochum and is PhD Candidate in the PhD program “International Development Studies” at the Institute of Development Research and Development Policy (IEE) and member of the DFG funded “Research School”. He was awarded several scholarships, like the Bronnbacher Scholarship and numerous DAAD and DFG travel and conference grants. He was a visiting scholar at the Miami-Florida European Union Center, University of Miami, and at the University of the Western Cape, South-Africa. He is (co)-author and (co)-editor of a number of publications, like “Power in the 21st Century – International Security and International Political Economy in a Changing World”, “Towards an New Understanding of Structural Power”, “Global Power Europe, Volume 1 and 2” and “Innovative Capabilities and Market Performance: The European Union in International Comparison”. Jan-Frederik presents his work frequently at major international (ISA, BISA, ECPR) and national (DGPW) conferences. Jan-Frederik is also Co-Initiator of cnsltnts and has conducted consultancy projects in South-Africa, the US and Germany.

Benedikt Müller is a technology consultant at Accenture with prior work experience as a technical sales professional at IBM. He holds a Bachelor's degree in International Management and a Master's degree in IT Management. His research interests revolve around the business impact of technology and the political and economic impact of cyber security.

"This magnificent volume sheds light on cyber security and cyber space's effects on IR from a vast variety of angles ­ theoretical as well as practical, concrete as well as abstract. It is a must-read for anyone interested in what is arguably the least understood feature of modern warfare."- Dr. Sarah Kirchberger, Junior Professor in Sinology at the Asia-Africa-Institute, University of Hamburg

"Cyberspace will become more and more meaningful for policy making in international politics and will have a significant influence on the future character of international relations in general. This book is the most comprehensive and up-to-date assessment of how cyberspace influences international politics, diplomacy, transnational activities and warfare. It is a must read for everyone who is interested in innovative theoretical approaches to understand these developments and in-depth interdisciplinary empirical studies alike. It should become a landmark contribution to the study of cyberspace’s influence on international relations."- Dr. Detmar Doering, Division Manager "Research" and Director Liberal Institute, Friedrich Naumann Foundation for Freedom

"The field of cybersecurity and warfare in International Relations is in its early stages but it will develop fast in the coming decades. Kremer´s and Müller´s edited book is one of the first real attempts to enhance our empirical, theoretical and conceptual understanding of this phenomenon by bringing together a series of experts from different backgrounds. As such, it should become one of the first reads for current and prospective IR students interested in cyberspace, cybersecurity and warfare."- Dr. Miguel Otero-Iglesias, Assistant Professor in International Political Economy at ESSCA School of Management, Paris, Department of International Affairs, Centre for European Integration. Visiting Research Fellow at the London School of Economics and Political Science, Centre for International Studies and at the Institute of World Economics and Politics at the Chinese Academy of Social Sciences

“Cyberspace is becoming the main threat to national security in many national security strategies as well as within defense organizations as NATO. The frequencies of cyber-attacks and the eventual relevance of their consequences take the issue to the forefront of security concerns and the possession of offensive cyber-capabilities a priority for some international actors.