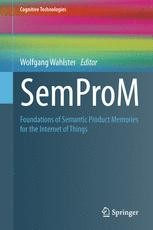 Foundations of Semantic Product Memories for the Internet of Things

The development of low-cost, compact digital storage, sensors and radio modules allows us to embed digital memories into products to record key events. Such computationally enhanced products can perceive and control their environment, analyze their observations, and communicate with other smart objects and human users. Digital product memories (DPMs) will play a key role in the upcoming fourth industrial revolution based on cyber-physical production systems, resulting in improvements in traceability and quality assurance, more efficient and flexible production, logistics, customization, and recycling, and better information for the consumer.

SemProM was a major industrial and academic research project that examined all aspects of the design and implementation of semantic product memories, and this book is a comprehensive assessment of the results achieved. The introductory chapters explain the fundamental ideas and the organization of the related project, while the remaining parts explain how to build, model and process DPMs, multimodal interaction using them, and selected applications.

The book explains successful deployment in applications such as manufacturing, green logistics, retail, healthcare, and food distribution, and it will be of value to both researchers and practitioners.

Prof. Dr. Dr. h.c. mult. Wolfgang Wahlster is the Director and CEO of the German Research Center for Artificial Intelligence (DFKI GmbH) and a Professor of Computer Science at Saarland University, Saarbrücken. In 2000, he was co-opted as a Professor of Computational Linguistics at the same university. In addition, he is the Head of the Intelligent User Interfaces Lab at DFKI.

He was awarded the Deutscher Zukunftspreis (German Future Award) in 2001 and he received the Federal Cross of Merit, First Class, the Officer's Cross of the Order of Merit of the Federal Republic of Germany in 2006.

He is the Chief Academic Advisor for Information and Communication Technologies (ICT) in the Research Union of the German Government, he is a member or chair of many key international scientific advisory and governance boards, including the National Institute of Informatics (NII) of Japan, the International Computer Science Institute (ICSI) at Berkeley, the SAP Next Business & Technology Advisory Board, the Intel Visual Computing Institute, the Fondazione Bruno Kessler, and the Future Internet Public-Private Partnership of the European Commission.

He has chaired and given invited talks at the key international conferences in computational linguistics and artificial intelligence, he is a board member of the key AI journals, and he is a Fellow of the Association for the Advancement of Artificial Intelligence (AAAI), the European Coordinating Committee for Artificial Intelligence (ECCAI), and the Gesellschaft für Informatik (GI).

Prof. Wahlster received the Donald E. Walker Distinguished Service Award at IJCAI-13, the International Joint Conferences on Artificial Intelligence, in recognition of his substantial contributions, as well as his extensive service to the field of artificial intelligence throughout his career.