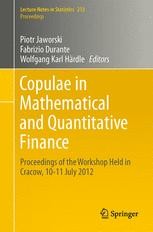 Copulae in Mathematical and Quantitative Finance

Copulas are mathematical objects that fully capture the dependence structure among random variables and hence offer great flexibility in building multivariate stochastic models. Since their introduction in the early 1950s, copulas have gained considerable popularity in several fields of applied mathematics, especially finance and insurance. Today, copulas represent a well-recognized tool for market and credit models, aggregation of risks, and portfolio selection. Historically, the Gaussian copula model has been one of the most common models in credit risk. However, the recent financial crisis has underlined its limitations and drawbacks. In fact, despite their simplicity, Gaussian copula models severely underestimate the risk of the occurrence of joint extreme events. Recent theoretical investigations have put new tools for detecting and estimating dependence and risk (like tail dependence, time-varying models, etc) in the spotlight. All such investigations need to be further developed and promoted, a goal this book pursues. The book includes surveys that provide an up-to-date account of essential aspects of copula models in quantitative finance, as well as the extended versions of talks selected from papers presented at the workshop in Cracow.

Wolfgang Karl Härdle is a Professor of Statistics at the Humboldt-Universität zu Berlin and the Director of CASE – the Centre for Applied Statistics and Economics. He teaches quantitative finance and semi-parametric statistical methods. His research focuses on dynamic factor models, multivariate statistics in finance and computational statistics. He is an elected member of the ISI and an advisor to the Guanghua School of Management, Peking University and to National Central University, Taiwan.