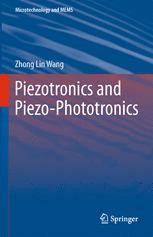 The fundamental principle of piezotronics and piezo-phototronics were introduced by Wang in 2007 and 2010, respectively. Due to the polarization of ions in a crystal that has non-central symmetry in materials, such as the wurtzite structured ZnO, GaN and InN, a piezoelectric potential (piezopotential) is created in the crystal by applying a stress. Owing to the simultaneous possession of piezoelectricity and semiconductor properties, the piezopotential created in the crystal has a strong effect on the carrier transport at the interface/junction. Piezotronics is for devices fabricated using the piezopotential as a “gate” voltage to control charge carrier transport at a contact or junction. The piezo-phototronic effect uses the piezopotential to control the carrier generation, transport, separation and/or recombination for improving the performance of optoelectronic devices, such as photon detector, solar cell and LED. The functionality offered by piezotroics and piezo-phototronics are complimentary to CMOS technology. There is an effective integration of piezotronic and piezo-phototronic devices with silicon based CMOS technology. Unique applications can be found in areas such as human-computer interfacing, sensing and actuating in nanorobotics, smart and personalized electronic signatures, smart MEMS/NEMS, nanorobotics and energy sciences. This book introduces the fundamentals of piezotronics and piezo-phototronics and advanced applications. It gives guidance to researchers, engineers and graduate students.

Dr. Zhong Lin (ZL) Wang is the Hightower Chair in Materials Science and Engineering, Regents' Professor, and Director, Center for Nanostructure Characterization, at Georgia Tech. Dr. Wang has made original and innovative contributions to the synthesis, discovery, characterization and understanding of fundamental physical properties of oxide nanobelts and nanowires, as well as applications of nanowires in energy sciences, electronics, optoelectronics and biological science. He is the leader figure in ZnO nanostructure research. His discovery and breakthroughs in developing nanogenerators establish the principle and technological road map for harvesting mechanical energy from environment and biological systems for powering a personal electronics. His research on self-powered nanosystems has inspired the worldwide effort in academia and industry for studying energy for micro-nano-systems, which is now a distinct disciplinary in energy research and future sensor networks. He coined and pioneered the field of piezotronics and piezo-phototronics by introducing piezoelectric potential gated charge transport process in fabricating new electronic and optoelectronic devices. This historical breakthrough by redesign CMOS transistor has important applications in smart MEMS/NEMS, nanorobotics, human-electronics interface and sensors. Wang also invented and pioneered the in-situ technique for measuring the mechanical and electrical properties of a single nanotube/nanowire inside a transmission electron microscope (TEM).
Dr. Wang is a pioneer and world leader in nanoscience and nanotechnology for his outstanding creativity and productivity. He has authored and co-authored 5 scientific reference and textbooks and over 750 peer reviewed journal articles (14 in Nature and Science, 6 in Nature sister journals), 45 review papers and book chapters, edited and co-edited 14 volumes of books on nanotechnology, and held 32 patents. Dr. Wang is the world’s top 5 most cited authors in nanotechnology. His entire publications have been cited for over 50,000 times. The H-index of his publications is 107. He has delivered over 700 keynote, plenary and invited talks at international and national conferences as well as universities and research institutes worldwide.
Dr. Wang was elected as a foreign member of the Chinese Academy of Sciences in 2009, member of European Academy of Sciences in 2002, fellow of American Physical Society in 2005, fellow of AAAS in 2006, fellow of Materials Research Society in 2008, fellow of Microscopy Society of America in 2010, and fellow of the World Innovation Foundation in 2002. He is an honorable professor of over 10 universities in China and Europe. He received 2011 MRS Medal from the Materials Research Society, 1999 Burton Medal from Microscopy Society of America, 2001 S.T. Li prize for Outstanding Contribution in Nanoscience and Nanotechnology, the 2009 Purdy Award from American Ceramic Society, NanoTech Briefs, Top50 award in 2005, the 2000 and 2005 Georgia Tech Outstanding Faculty Research Author Awards, Sigma Xi 2005 sustain research awards, Sigma Xi 1998 and 2002 best paper awards, NSF CAREER in 1998. His breakthrough researches in the last 15 years have been featured by over 50 media world wide including CNN, BBC, FOX News, New York Times, Washington Post, NPR radio, Time Magazine, National Geography Magazine, Discovery Magazine, New Scientists, and Scientific America. Details can be found at:  http://www.nanoscience.gatech.edu/zlwang