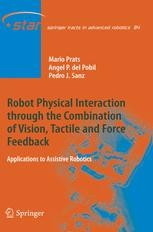 Robot Physical Interaction through the combination of Vision, Tactile and Force Feedback

Robot manipulation is a great challenge; it encompasses versatility -adaptation to different situations-, autonomy -independent robot operation-, and dependability -for success under modeling or sensing errors. A complete manipulation task involves, first, a suitable grasp or contact configuration, and the subsequent motion required by the task. This monograph presents a unified framework by introducing task-related aspects into the knowledge-based grasp concept, leading to task-oriented grasps.

Similarly, grasp-related issues are also considered during the execution of a task, leading to grasp-oriented tasks which is called framework for physical interaction (FPI). The book presents the theoretical framework for the versatile specification of physical interaction tasks, as well as the problem of autonomous planning of these tasks. A further focus is on sensor-based dependable execution combining three different types of sensors: force, vision and tactile.

The FPI approach allows to perform a wide range of robot manipulation tasks. All contributions are validated with several experiments using different real robots placed on household environments; for instance, a high-DoF humanoid robot can successfully operate unmodeled mechanisms with widely varying structure in a general way with natural motions.

This research was recipient of the European Georges Giralt Award and the Robotdalen Scientific Award Honorary Mention.

“This book is framed within the field of assistive manipulator robots. In particular, it focuses on the integration of grasp-based and task-based approaches in manipulator robots. … The book is well structured. … The audience of this book includes researchers, PhD students, and postgraduate students. The book will also be of interest to robotic companies that develop manipulator robots, because the proposed framework is far beyond the typical pick-and-place applications, and would help to develop more challenging robots.” (Ramon Gonzalez Sanchez, ACM Computing Reviews, February, 2013)