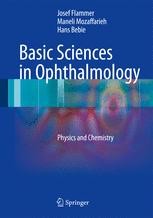 Basic Sciences in Ophthalmology aims to link clinical ophthalmology directly to its basic science roots. This first volume describes the physics and chemistry required for a sound understanding of modern ophthalmology. The book opens with an extensive discussion of the interaction of light with matter and the way in which light is used in ophthalmic examinations and treatments. After describing traditional methods of imaging, particular emphasis is placed on modern instrumentation such as OCT. The interaction between light and tissues in different types of laser treatment is also addressed. The chemistry section focuses on compounds particularly relevant to the eye, such as oxygen and water. The origin and consequences of oxidative stress are reviewed, and the physical behavior of chemical compounds in the eye is explained. Understanding is facilitated through the use of many examples taken from the field of ophthalmology. The text is complemented by about 450 figures.

Josef Flammer, MD, is Professor and Head of the Department of Ophthalmology at the University of Basel, Switzerland. He studied medicine at the Universities of Fribourg and Bern and submitted his thesis in the field of neurobiology in 1975. After the residency in neurology, medicine, and ophthalmology in Switzerland, he became a Research Fellow at the University of British Columbia, Vancouver, Canada. Since 1987, he has been Head of the Department of Ophthalmology in Basel and also served two years as Dean of the Faculty of Medicine. He has been the recipient of many awards, including the International Chibret Award, the Alfred Vogt Award, the Alcon Award, the William MacKenzie Award, the Montgomery Award, the Medal of the University of Helsinki, the Gold Medal of the Saudi Arabia Ophthalmological Society, and the Georg Bartisch Award among others. He has been an invited Professor and guest lecturer in many places and an honoree member of various organizations. He has been the lead author or co-author on numerous articles as well as a number of books.

Maneli Mozaffarieh, MD, obtained a Bachelor of Science (Major in Microbiology) from McGill University, Montreal, before studying medicine at the Medical University of Vienna, where she graduated in 1999. She then undertook research at the same university before entering general practice in 2003. From 2005 to 2009, Dr. Mozaffarieh was a Resident and Research Fellow in the Department of Ophthalmology, University Hospital of Basel, obtaining Certificates in Basic Science Assessment and in Optics and Refraction, as well as in Clinical Science from the International Council of Ophthalmology (ICO). Since 2009, she has been a Glaucoma Fellow in the same department.

“The text is accompanied by beautiful, concise illustrations (by Natasa Cmiljanovic, Rebekka Heeb and Peter Räber) that are of great value in conveying the main points. … this is a book worth having and consulting when you wish to be reminded of the fundamentals … .” (Shiri Diskin, Graefe's Archive for Clinical and Experimental Ophthalmology, Vol. 255, 2017)