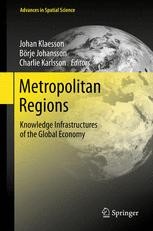 Knowledge Infrastructures of the Global Economy

Metropolitan growth has been dramatic in the past several decades, and today metropolitan regions are recognized as the main driving forces in national growth and development as well as in national and global innovation processes. The purpose of this book is to contribute to a better understanding of how metropolitan regions and their subsystems interact and compete, why they differ in their capacity to nurture innovation and growth, and how metropolitan policies must be designed to secure the region’s long-term vitality. To that end, it presents new contributions on theories of urban growth, institutions and policies of urban change, and case studies of urban growth prepared by international experts.

Johan Klaesson is an Associate professor of Economics at Jönköping International Business School (JIBS). He is also Director of the research center CEnSE (Centre for Entrepreneurship and Spatial Economics) located at JIBS. He received his PhD in 2001. He has worked on regional development for the Swedish Board of Agriculture. He was appointed Associate professor at JIBS in 2007. His research focus on regional growth and development and in particular the regional effects of infrastructure, entrepreneurship and the “knowledge economy”.

Börje Johansson is professor of Economics at the Jönköping International Business School (JIBS) and adjunct professor at the Economics division at the Royal Institute of Technology (KTH). At the same place he is also director of CESIS, Centre of Excellence for Science and Innovation Studies, sharing his time between KTH and JIBS. He received his PhD at  Gothenburg University in 1978 and was acting professor in Regional economics at the University of Umeå in 1979. At the same university he has been director of the Centre of Regional Science (CERUM) and professor of Regional Economics. In 1982 he joined the international institute IIASA and was in charge of the Regional Development Program. Later he was appointed professor at the University of Trondheim in Norway, guest professor at KTH, and professor at Jönköping International Business School. He has spent research periods at the Tottori and Kyoto Universities, at CSIRO (Melbourne) and Boston University. He has also been guest scientist of the Japan Society for the Promotion of Science (JSPS-grant). 2000-2003 he was president of the European Regional Science Association ERSA. He has published a wide set of journal articles books, and edited books.

Charlie Karlsson is Professor of the Economics of Technological Change at Jönköping International Business School (JIBS), Jönköping, Sweden, Guest Professor of Economics at University West, Trollhättan, Sweden, Professor of Industrial Economics and Organization at Blekinge Technical University, Karlskrona, Sweden and Associate Professor (“docent”) in Regional Planning at the Royal Institute of Technology, Stockholm, Sweden. Charlie Karlsson is the president of the European Regional Science Association (ERSA) since January 1st 2009. In his research, he has focused on infrastructure economics, urban economics, the economics of innovation and technological change, regional economics, spatial industrial dynamics, entrepreneurship and small business economics, international trade and the economics of R&D and higher education. He has published articles in the Papers in Regional Science, Entrepreneurship and Regional Development, Regional Studies, Environment and Planning A, Growth and Change, The Annals of Regional Science, Annales D’Économie et de Statistique, Italian Journal of Regional Science, Industry and Innovation, Research Policy and Small Business Economics, contributed with chapters in a large number of edited books, and served as editor for more than 20 books published by Springer, Edward Elgar, Routledge and Cambridge University Press, and for a number of special issues of international scientific journals. Charlie Karlsson also has a long experience as independent consultant.