SpringerBriefs on Pioneers in Science and Practice
Free Preview 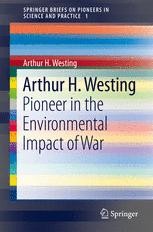 Pioneer on the Environmental Impact of War

Since the 1960s the environment has become an issue of increasing public concern in North America and elsewhere.  Triggered by the Second Indochina War (Vietnam Conflict) of 1961-1975, and further encouraged by the International Conference on the Human Environment, held in Stockholm in 1972, the environmental impact of war emerged and grew as a topic of research in the natural and the social sciences.  And in the late 1980s this led additionally to a focus and debate on environmental security.  Arthur Westing, a forest ecologist, was a major pioneer contributing and framing both of those debates conceptually, theoretically, and empirically, starting with Harvest of Death:  Chemical Warfare in Vietnam and Cambodia (1972) (co-authored with wildlife biologist E.W. Pfeiffer and others).  As a Senior Researcher at the Stockholm and Oslo International Peace Research Institutes (SIPRI and PRIO), and as a Professor of Ecology at Windham and Hampshire Colleges, Westing authored and edited books on Ecological Consequences of the Second Indochina War (1976), Weapons of Mass Destruction and the Environment (1977), Warfare in a Fragile World:  Military Impact on the Human Environment (1980), Herbicides in War:  the Long-term Ecological and Human Consequences (1984), Environmental Warfare:  a Technical, Legal and Policy Appraisal (1984), Explosive Remnants of War:  Mitigating the Environmental Effects (1985), Global Resources and International Conflict:  Environmental Factors in Strategic Policy and Action (1986), Cultural Norms, War and the Environment (1988), Comprehensive Security for the Baltic:  an Environmental Approach (1989), and Environmental Hazards of War:  Releasing Dangerous Forces in an Industrialized World (1990) --- as well as authoring numerous UN reports, book chapters, and journal articles.  This volume combines six of his pioneering contributions on the environmental consequences of warfare in Viet Nam and in Kuwait, on the environmental impact of nuclear war, and on legal constraints and military guidelines for protecting the environment in wartime

Arthur H. Westing USA): Ph.D. (Yale), UNEP Global 500 Roll of Honour (1990); Fellow, AAAS, member of steering group of its Section on Societal Impacts of Science and Engineering, heads Westing Associates in Environment, Security & Education; former Professor of Ecology and Dean of Natural Science at Hampshire College. He was a research forester with the US Forest Service, taught forestry, ecology, and conservation at various colleges and uni-versities, was a senior researcher at SIPRI and PRIO where he directed the UNEP project on 'Peace, Security, and the Environment'. He has been a Consultant in Environmental Security to the World Bank, UNEP, UNIDIR, and UNESCO, to the International Committee of the Red Cross, to the Government of Eritrea. He is a member of the World Conservation Union (IUCN) World Commission on Protected Areas, Vice-President of the International Society of Naturalists (INSONA), and member or advisor to other international environmental non-governmental organizations and scholarly journals.