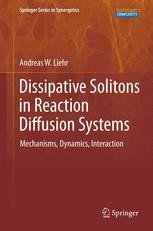 Why writing a book about a specialized task of the large topic of complex systems? And who will read it? The answer is simple: The fascination for a didactically valuable point of view, the elegance of a closed concept and the lack of a comprehensive disquisition.

The fascinating part is that field equations can have localized solutions exhibiting the typical characteristics of particles. Regarding the field equations this book focuses on, the field phenomenon of localized solutions can be described in the context of a particle formalism, which leads to a set of ordinary differential equations covering the time evolution of the position and the velocity of each particle. Moreover, starting from these particle dynamics and making the transition to many body systems, one considers typical phenomena of many body systems as shock waves and phase transitions, which themselves can be described as field phenomena. Such transitions between different level of modelling are well known from conservative systems, where localized solutions of quantum field theory lead to the mechanisms of elementary particle interaction and from this to field equations describing the properties of matter. However, in dissipative systems such transitions have not been considered yet, which is adjusted by the presented book. The elegance of a closed concept starts with the observation of self-organized current filaments in a semiconductor gas discharge system. These filaments move on random paths and exhibit certain particle features like scattering or the formation of bound states. Neither the reasons for the propagation of the filaments nor the laws of the interaction between the filaments can be registered by direct observations. Therefore a model is established, which is phenomenological in the first instance due to the complexity of the experimental system. This model allows to understand the existence of localized structures, their mechanisms of movement, and their interaction, at least, on a qualitative level. But this model is also the starting point for developing a data analysis method that enables the detection of movement and interaction mechanisms of the investigated localized solutions. The topic is rounded of by applying the data analysis to real experimental data and comparing the experimental observations to the predictions of the model.

A comprehensive publication covering the interesting topic of localized solutions in reaction diffusion systems in its width and its relation to the well known phenomena of spirals and patterns does not yet exist, and this is the third reason for writing this book. Although the book focuses on a specific experimental system the model equations are as simple as possible so that the discussed methods should be adaptable to a large class of systems showing particle-like structures.

Therefore, this book should attract not only the experienced scientist, who is interested in self-organization phenomena, but also the student, who would like to understand the investigation of a complex system on the basis of a continuous description.

“This book aims to summarize theoretical and experimental results dealing with localized pulses (‘dissipative solitons’) in reaction-diffusion systems. … The book is written to be accessible to graduate students.” (Boris A. Malomed, Mathematical Reviews, December, 2013)