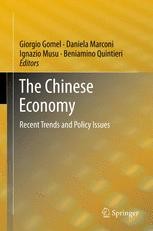 ​​This book takes readers on a unique journey across some of the most debated implications of the rise of the Chinese economy on the global scene. From the analysis, suggestions emerge on how to improve statistical tools to measure performance and to obtain more precise macroeconomic forecasts. Moreover, it confirms the suspicion that a governance model of firms that does not sufficiently encourage market competition may have significant costs in terms of efficiency for the Chinese production system. The analysis of demographic factors and of household savings gives further support to calls for a serious reform effort, particularly of the pension and health care systems, to utilize households’ savings more efficiently and equitably. Finally the analyses of Chinese and global trade underscore the need for a less superficial consideration of the implications of the Chinese presence in global markets.​

Giorgio Gomel graduated in Political Science from the University of Torino and obtained an MPhil. in Economics from Columbia University in New York. From 1982 to 1984 he was Assistant to Italy’s Executive Director at the IMF. He now heads the International Economic Analysis and Relations Department of the Bank of Italy. He represents the Bank of Italy in a number of international committees and institutions (IMF, G7, G20). He is the author of numerous articles on international monetary economics, LDCs’ external debt, migration, EMU and the economies of the Mediterranean.

Daniela Marconi graduated in Economics from the University of Rome “La Sapienza”; she received a M.A. degree in economics from Coripe Piemonte (Torino, Italy) and obtained a MPhil. form Duke University (North Carolina, USA). In 2008/09 she was a visiting research fellow at the International Development Department of the University of Oxford (UK). Since 2002 she works as Senior Economist in the Bank of Italy’s Emerging Market and World Trade Division, conducting macroeconomic and structural analysis on emerging economies, particularly on China. Her main academic interests relate to international trade, technological progress, economic growth and environmental economics. She authored numerous papers and articles in these areas.

Ignazio Musu is full Professor of Economics at Ca’ Foscari University of Venice, where he has been Dean of the Department of Economics and member of the Academic Senate. From 1999 to 2005 he was Dean of Venice International University where he is now in charge of the Sino-Italian Training Program in Sustainable Development. He is currently Member of the Advisory Board of Ca’ Foscari University of Venice, Fellow of the Italian “Accademia dei Lincei” and Member of the Advisory Board of the Bank of Italy.

Beniamino Quintieri is Dean and full professor of International Economics at the Department of Economics, University of Rome “Tor Vergata”. He is Chairman of the “Manlio Masi Foundation – National Observatory for Internationalisation and Trade”. From 2007 to 2011 he was Commissioner General of Italy of the World Exposition of Shanghai 2010. From 2001 to 2004 Chairman of the Italian Institute for Foreign Trade (ICE – Istituto nazionale per il Commercio Estero).