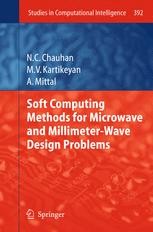 The growing commercial market of Microwave/ Millimeter wave industry over the past decade has led to the explosion of interests and opportunities for the design and development of microwave components.The design of most microwave components requires the use of commercially available electromagnetic (EM) simulation tools for their analysis. In the design process, the simulations are carried out by varying the design parameters until the desired response is obtained. The optimization of design parameters by manual searching is a cumbersome and time consuming process. Soft computing methods such as Genetic Algorithm (GA), Artificial Neural Network (ANN) and Fuzzy Logic (FL) have been widely used by EM researchers for microwave design since last decade. The aim of these methods is to tolerate imprecision, uncertainty, and approximation to achieve robust and low cost solution in a small time frame.  Modeling and optimization are essential parts and powerful tools for the microwave/millimeter wave design. This book deals with the development and use of soft computing methods for tackling challenging design problems in the microwave/millimeter wave domain. The aim in the development of these methods is to obtain the design in small time frame while improving the accuracy of the design for a wide range of applications. To achieve this goal, a few diverse design problems of microwave field, representing varied challenges in the design, such as different microstrip antennas, microwave filters, a microstrip-via and also some critical high power components such as nonlinear tapers and RF-windows are considered as case-study design problems. Different design methodologies are developed for these applications. The presents soft computing methods, their review for microwave/millimeter wave design problems and specific case-study problems to infuse better insight and understanding of the subject.

M.V. Kartikeyan (Senior Member, 2003) was born in Nellore (Andhra Pradesh), India, in 1961. He received the M.Sc. and Ph.D. degrees in 1985 and 1992 in physics and electronics engineering respectively from the Banaras Hindu University, India.
Dr. Kartikeyan is the recipient of a Hildegard-Maier Research Fellowship for Electrical Sciences of the Alexander von Humboldt Foundation and the Alexander von Humboldt Research Fellowship for long-term Cooperation and worked at the Institut für Hochleistungsimpuls- und Mikrowellentechnik, Karlsruhe Institute of Technology, Germany. He joined the Department of Electronics and Computer Engineering, Indian Institute of Technology, Roorkee, India, in 2003 as an Associate Professor and since September 2009 he is working as a Full-Professor. His research interests include Millimeter Wave Engineering (Electron Cyclotron Masers and other High Power Devices and Components), Microstrip Antennas for Communications, Computational Electromagnetics, Microwave Integrated Circuits, and RF & Microwave Design with Soft Computing Techniques.
Dr. Kartikeyan is the principal author of a book entitled “Gyrotrons-High Power Microwave and Millimeter Wave Technology,” for the Springer (Berlin, Heidelberg, New York, 2004).
Dr. Kartikeyan is a Life Fellow of the Institution of Electronics and Telecommunications Engineers (IETE) and a Fellow of the Institution of Engineers (IE), India.

Dr. Narendra Chauhan received the Bachlor of Engineering and Master of Engineering in Computer Engineering from the Sardar Patel University, Gujarat, India in 2001 and 2004 respectively. He received PhD award from Department of Electronics & Computer Engineering, Indian Institute of Technology Roorkee in February 2010. Dr. Chauhan has worked as Lecturer and Assistant Professor at A. D. Patel Institute of Technology, Anand, India during 2003 to 2008. He is at present serving Department of Information Technology, A. D. Patel Institute of Technology as associate professor since October 2008.
He has eight international journal papers and eighteen international/national conference papers to his credit some of which includes publication in Springer and IEEE Transaction. He has guided six M.E./M.Tech. dissertation thesis and more than twenty B.E. projects at Sardar Patel University and Gujarat Technological University, Gujarat, India.
His research interest includes soft computing, microwave and millimeter-wave design applications, approximate modeling and engineering design optimizations, image and video processing, computer vision and data mining.

Dr. Ankush Mittal received the B. Tech. in Computer Science and Engg. from the Indian Institute of Technology, Delhi in 1996 and Master's in 1998 respectively. He was nominated for outstanding PhD award by Electrical and Computer Engg, The National University of Singapore in 2001. Dr. Mittal was a faculty member in the Department of Computer Science, National University of Singapore for two years. He has also worked as an Associate professor at IIT-Roorkee for seven years. He is at present serving College of Engineering Roorkee as Director (Research) and facilitates publications, grants, and research aptitude of faculty and students at COER.
He has contributed more than 200 research papers in journals and conferences of high repute with significant impact factor, many of which are in IEEE transactions, Springer and Elsevier journals. He is also a co-author of a book on Bayesian Network technologies published by Information Science, USA.
He was conferred young scientist awards from the National Academy of Sciences in 2006, and from Indian Science Congress Association (ISCA) in 2007. He received outstanding teacher award for his excellent teaching at IIT Roorkee in 2008. Dr. Mittal's research received international recognition and he was conferred with IBM faculty award in 2008.
He has guided 7 Ph.D. thesis, 30 M. Tech. thesis and 20 B. Tech. thesis at The National University of Singapore and IIT Roorkee. His research interest include image and video processing, content based retrieval, E-learning, and bioinformatics.