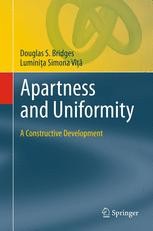 The theory presented in this book is developed constructively, is based on a few axioms encapsulating the notion of objects (points and sets) being apart, and encompasses both point-set topology and the theory of uniform spaces. While the classical-logic-based theory of proximity spaces provides some guidance for the theory of apartness, the notion of nearness/proximity does not embody enough algorithmic information for a deep constructive development. The use of constructive (intuitionistic) logic in this book requires much more technical ingenuity than one finds in classical proximity theory -- algorithmic information does not come cheaply -- but it often reveals distinctions that are rendered invisible by classical logic.

In the first chapter the authors outline informal constructive logic and set theory, and, briefly, the basic notions and notations for metric and topological spaces. In the second they introduce axioms for a point-set apartness and then explore some of the consequences of those axioms. In particular, they examine a natural topology associated with an apartness space, and relations between various types of continuity of mappings. In the third chapter the authors extend the notion of point-set (pre-)apartness axiomatically to one of (pre-)apartness between subsets of an inhabited set. They then provide axioms for a quasiuniform space, perhaps the most important type of set-set apartness space. Quasiuniform spaces play a major role in the remainder of the chapter, which covers such topics as the connection between uniform and strong continuity (arguably the most technically difficult part of the book), apartness and convergence in function spaces, types of completeness, and neat compactness. Each chapter has a Notes section, in which are found comments on the definitions, results, and proofs, as well as occasional pointers to future work. The book ends with a Postlude that refers to other constructive approaches to topology, with emphasis on the relation between apartness spaces and formal topology.

Largely an exposition of the authors' own research, this is the first book dealing with the apartness approach to constructive topology, and is a valuable addition to the literature on constructive mathematics and on topology in computer science. It is aimed at graduate students and advanced researchers in theoretical computer science, mathematics, and logic who are interested in constructive/algorithmic aspects of topology.

Prof. Douglas S. Bridges is a professor of pure mathematics at the University of Canterbury. His research interests include the constructive foundations of analysis and topology; mathematical economics; computability and abstract complexity theory; and quantum logic. He has published many related articles and papers, among his 8 authored books are "Computability: A Mathematical Sketchbook", "Foundations of Real and Abstract Analysis", and "Techniques of Constructive Analysis". He is a Fellow of the Royal Society of New Zealand, and a Corresponding Fellow of the Royal Society of Edinburgh. Dr. Luminiţa Simona Vîţă is an Adjunct Fellow of the Department of Mathematics and Statistics, University of Canterbury, and a Senior Business Analyst with the New Zealand Customs Service. Her research interests include constructive foundations of analysis and topology, and recursive function theory, computability and complexity. She has published many related articles and papers, and coauthored "Techniques of Constructive Analysis".