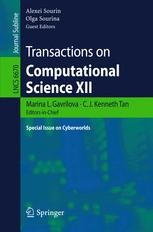 The LNCS journal Transactions on Computational Science reflects recent developments in the field of Computational Science, conceiving the field not as a mere ancillary science but rather as an innovative approach supporting many other scientific disciplines. The journal focuses on original high-quality research in the realm of computational science in parallel and distributed environments, encompassing the facilitating theoretical foundations and the applications of large-scale computations and massive data processing. It addresses researchers and practitioners in areas ranging from aerospace to biochemistry, from electronics to geosciences, from mathematics to software architecture, presenting verifiable computational methods, findings, and solutions and enabling industrial users to apply techniques of leading-edge, large-scale, high performance computational methods.

The 12th issue of the Transactions on Computational Science journal, edited by Alexei Sourin and Olga Sourina, is devoted to the topic of cyberworlds. The 13 papers in the volume constitute revised and extended versions of a selection of contributions presented at CW 2010, the 20th International Conference on Cyberworlds, held in Singapore in October 2010. The selected papers span the areas of tangible interfaces, emotion recognition, haptic modeling, decision making under uncertainty, reliability measures, use of biometrics for avatar recognition, cybernavigation, multiuser virtual environments, spatial data sampling, web visualization, and interactive character animation system design.