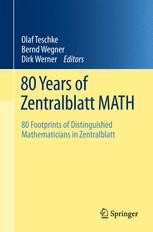 80 Footprints of Distinguished Mathematicians in Zentralblatt

Founded in 1931 by Otto Neugebauer as the printed documentation service "Zentralblatt für Mathematik und ihre Grenzgebiete"', Zentralblatt celebrates its 80th anniversary in 2011 as the most comprehensive reference database worldwide, now under the new name ZBMATH.

Several prominent mathematicians have been involved in this service as reviewers or editors. Zentralblatt has covered their work as a part of its general documentation activities, dealing with all mathematicians worldwide. All mathematicians  have left their footprints in Zentralblatt, in a long list of entries describing all of their research publications in mathematics.

This book provides one review from each of the 80 years of Zentralblatt, most often connected with a prominent mathematician related to Zentralblatt as a member of the editorial board or as a reviewer. Names like Courant, Kolmogorov, Hardy, Hirzebruch, Faltings and many others can be found here. In addition to the original reviews, the book offers the authors' profiles indicating their co-authors, their favourite journals and the time span of their publication activities.

In addition to this, a generously illustrated essay by Silke Göbel describes the history of Zentralblatt.