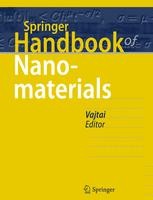 The Springer Handbook of Nanomaterials covers the description of materials which have dimension on the "nanoscale". The description of the nanomaterials in this Handbook follows the thorough but concise explanation of the synergy of structure, properties, processing and applications of the given material. The Handbook mainly describes materials in their solid phase; exceptions might be e.g. small sized liquid aerosols or gas bubbles in liquids. The materials are organized by their dimensionality. Zero dimensional structures collect clusters, nanoparticles and quantum dots, one dimensional are nanowires and nanotubes, while two dimensional are represented by thin films and surfaces. The chapters in these larger topics are written on a specific materials and dimensionality combination, e.g. ceramic nanowires. Chapters are authored by well-established and well-known scientists of the particular field. They have measurable part of publications and an important role in establishing new knowledge of the particular field.

Robert Vajtai is a Faculty Fellow in the Department of Mechanical Engineering & Materials Science at Rice University, Houston, USA. His scientific interests cover synthesis, processing, and characterization of physical and chemical properties of new material forms and structures, mainly nanostructured materials, nanocomposites and nanomaterials; as well as applications of these materials in thermal management, energy storage, MEMS, and electronic devices.

He received his MS degree in Physics and his Doctor’s degree in Solid-State Physics from the University of Szeged, Hungary, in 1986 and 1997, respectively. From 1987 to 2002 he was a Faculty Member of the Experimental Physics Department of Szeged University, Hungary.  He also spent sabbatical time as a Fellow of the Swedish Institute in The Ångstrom Laboratory in Uppsala, Sweden, from 1998 to 1999; as an Eötvös Fellow at the EPFL in Lausanne, Switzerland from 1995 to 1996 and he also visited the Max Planck Institute in Göttingen, Germany in 1993 via a Max Planck Fellowship. He was rewarded by the Bolyai Fellowship of the Hungarian Scientific Academy for 1999-2000.

Before joining Rice University, Dr. Vajtai spent eight years at the Rensselaer Polytechnic Institute, where he was a Laboratory Manager at the Rensselaer Nanotechnology Center managing the nanoparticle generation by inert-gas deposition and the carbon nanotechnology laboratories. Dr. Vajtai is on the Editorial Board of the journals Nanopages and Fluctuations and Noise Letters.

“This is the best and most comprehensive single source book on nanotechnology involving the chemistry, biophysics, and tissue engineering of nanoparticles, nanotubes, nanofilaments, and ceramics. … The book is of great value for biochemists, inorganic physical chemists, engineerings, biomedical researchers, students, and physicians at various levels of the training cycles. It may be a standard text for the next several years.” (Joseph J. Grenier, Amazon.com, February, 2016)