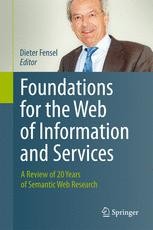 Foundations for the Web of Information and Services

A Review of 20 Years of Semantic Web Research

In the mid 1990s, Tim Berners-Lee had the idea of developing the World Wide Web into a „Semantic Web“, a web of information that could be interpreted by machines in order to allow the automatic exploitation of data, which until then had to be done by humans manually.

One of the first people to research topics related to the Semantic Web was Professor Rudi Studer. From the beginning, Rudi drove projects like ONTOBROKER and On-to-Knowledge, which later resulted in W3C standards such as RDF and OWL. By the late 1990s, Rudi had established a research group at the University of Karlsruhe, which later became the nucleus and breeding ground for Semantic Web research, and many of today’s well-known research groups were either founded by his disciples or benefited from close cooperation with this think tank.

In this book, published in celebration of Rudi’s 60th birthday, many of his colleagues look back on the main research results achieved during the last 20 years. Under the editorship of Dieter Fensel, once one of Rudi’s early PhD students, an impressive list of contributors and contributions has been collected, covering areas like Knowledge Management, Ontology Engineering, Service Management, and Semantic Search.
Overall, this book provides an excellent overview of the state of the art in Semantic Web research, by combining historical roots with the latest results, which may finally make the dream of a “Web of knowledge, software and services” come true.

Dieter Fensel holds a professorship at the University of Innsbruck and is the director of STI Innsbruck, a Computer Science research institute with over 60 employees. He has over 240 publications in the form of scientific books and journals, conferences, and workshop contributions. He has co-organized over 200 conferences and workshops. He has supervised over 40 master and Ph.D. theses and is a recipient of the Carl-Adam-Petri-Award of the Faculty of Economic Sciences from the University of Karlsruhe. His current research interests focus on the development and application of semantics to all areas of Computer Science. Dieter Fensel is also the co-founder and president of the newly established Semantic Technology Institute (STI) International, whose major aim is to establish semantics as a core pillar of modern Computer Science. STI International was the natural progression of DERI International where Dieter Fensel established expedient relationships with major research centers around Europe, Asia and America.

"This is an excellent collection of contributions on advancements in the World Wide Web (WWW)--the semantic Web in particular--in the last 20 years. The book is primarily intended for researchers in the semantic Web field. I recommend it especially for newcomers." - M. Bielikova, ACM Computing Reviews, August 2012