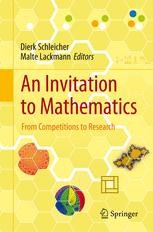 An Invitation to Mathematics

From Competitions to Research

The contributions are written for interested students at the age of transition between high school and university who know high school mathematics and perhaps competition mathematics and who want to find out what current research mathematics is about. We hope that it will also be of interest to teachers or more advanced mathematicians who would like to learn about exciting aspects of mathematics outside of their own work or specialization.

Together with a team of young ``test readers'', editors and authors have taken great care, through a substantial ``active editing'' process, to make the contributions understandable by the intended readership.

“What is new about ‘An Invitation to Mathematics,’ edited by Dierk Schleicher and Malte Lackmann, is that it invites serious students to go beyond mere appreciation of the subject and to contemplate research mathematics as a future career. Seriously. … As the cover illustration suggests, number theory, dynamical systems, graph theory, analysis, game theory, and communication theory are represented here. The articles are intended for motivated high-school students. ... Anyone, student or professional mathematician, will benefit from reading them.” (Daniel S. Silver, The Mathematical Intelligencer, Vol. 37, 2015)

“A delightful collection of articles from 14 leading mathematicians, each introducing a direction of current mathematical research. … The authors talk to the readers as to their equal with the sole intention to share their joy in doing mathematics. … The book is indeed a pleasure to read; it will be of interest to mature mathematicians regardless of their professional orientation and to the budding mathematicians who look around for a congenial field to settle in.” (Alex Bogomolny, The Mathematical Association of America, December, 2011)

“This book is a recopilation of 14 contributions written with the ‘excuse’ of the 50th International Mathematical Olympiad, which was held in Bremen (Germany) in 2009. … Each of the pieces focuses in a particular area, covering altogether a wide range of mathematics. The texts are primarily addressed to students who have participated at IMOs … . The book may be nice reading for a student in a first degree of Mathematics, or for anyone with interests in mathematics in general.” (Vicente Muñoz, The European Mathematical Society, September, 2011)