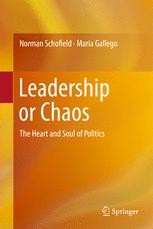 The Heart and Soul of Politics

Combining elements of economic reasoning and political science has proven to be very useful for understanding the broad variation in economic development around the world. In a sense research in this field goes back to the Scottish Enlightenment and Adam Smith’s original plan in his Theory of Moral Sentiments and Wealth of Nations. Leadership or Chaos by Norman Schofield and Maria Gallego is intended as an advanced, self-contained text in political economy dealing with social choice. The theory and empirical analysis are used to examine democratic institutions and elections in the developed world, and the success or failure of moves to democratization in the less developed world. The book closes with a consideration of current quandaries with regard to political and economic stability and climate change and a discussion of the moral foundations of our society.

Norman Schofield is Director of the Center in Political Economy, the William R. Taussig Professor of Political Economy, and Professor in the Departments of Economics and Political Science. He is currently working on topics in the theory of social choice, political economy, and democracy. In 2003-4 he was the Fulbright distinguished professor at Humboldt University in Berlin, and has recently held fellowships at ICER in Turin, and at the Hoover Institution at Stanford. In Spring 2008 he was the visiting Leitner Professor at Yale University.

His earlier books include Multiparty Government (with Michael Laver, in 1990), Social Choice and Democracy (1985), and three co-edited volumes: Political Economy: Institutions, Information, and Representation (1993) ,and Social Choice, Welfare and Ethics (1995), (both with Cambridge University Press), and Collective Decision Making (Kluwer, 1996). His more recent books include Mathematical Methods in Economics and Social Choice ( Springer in 2003). Architects of Political Change (2006), Multiparty Democracy (with Itai Sened, 2006), both with Cambridge University Press, The Spatial Model of Politics (Routledge, 2008), and The Political Economy of Democracy and Tyranny (Oldenbourg. 2009). His book on Leadership or Chaos, with Gallego, includes analyses of elections in Britain, Canada, the US, Turkey, and Russia, and is in press with Springer.  A co-edited volume with Caballero is also in press with Springer.

He has been the recipient of a number of NSF awards, most recently one on electoral politics and regime change.

Maria Gallego is an associate professor at Wilfrid Laurier University in Waterloo, Canada. Gallego has been concerned with leadership accountability in political economy situations and how the strategic interactions between political and economic agents determine policy outcomes. Using results from her empirical study of leadership transitions (Canadian Journal of Economics, 1996, and Economics and Politics, 1998) she then developed with Carolyn Pitchik an economic theory of leadership transition (Journal of Public Economics 2004). With Cressman she extended Nash's bargaining model to allow agents to have single peaked rather than increasing preferences over the policy space (Mathematical Social Science 2009). With Scoones she applied this theory to intergovernmental negotiations (Social Choice and Welfare, 2011). More recently, Gallego joined the research project with Schofield and has participated in studying individual elections in various countries. She and Schofield ran a workshop on the Political Economy of Bargaining in April 2008. With Schofield and Kilgour, they co-edited a Special Issue of Social Choice and Welfare on the Political Economy of Elections and Bargaining. Some of the work with Schofield is included in the book on Leadership or Chaos. The book is in press with Springer. Gallego has also visited the Toulouse School of Economics and the Center in Political Economy at Washington University in St. Louis.