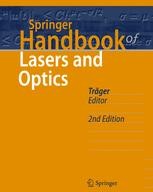 Springer Handbook of Lasers and Optics

In addition, major complete updates for the chapters: Optical Materials and Their Properties, Optical Detectors, Nanooptics, and Optics far Beyond the Diffraction Limit.

Frank Träger is a Full Professor of Experimental Physics and Head of the Interdisciplinary Center for Nanostructure Science and Technology – CINSaT at the University of Kassel, Germany.

Frank Träger received the diploma in physics from the University of Heidelberg where he continued his research to earn a Ph.D. in physics in 1974. Following his habilitation, he joined the IBM Almaden Research Center in San José, California, as a guest scientist from 1981 to 1982 and for several sabbaticals until 1986.

Since 1986, he has been an associate Professor at the Institute of Physics of the University of Heidelberg, and since September 1990 a full Professor in the Physics Department of the University of Kassel, Germany. His current research interests are the preparation and characterization of metal nanoparticles and self-assembled functional films, nonlinear optical phenomena, the study and application of nonthermal desorption and ablation phenomena, ultrafast electron dynamics on the femtosecond timescale and, last but not least, imaging of DNA by scanning probe microscopies. In his experiments, tunable laser radiation plays an essential role.

Frank Träger serves as the Editor-in-Chief of the international journal Applied Physics B – Lasers and Optics published by Springer-Verlag. He is a Corresponding Member of the Heidelberg Academy of Sciences and of acatech, Konvent für Technikwissenschaften der Union der deutschen Akademien der Wissenschaften e.V.

"Frank Träger has assembled a veritable who’s who of laser researchers … . In short, go out and buy this book; it is an excellent desk reference for researchers and research students. Undergraduates will find much to interest them, especially those contemplating entering the field. My only problem is where to hide my copy before my students think it should be on their shelf!" (Barry Luther-Davies, Australian Physics, Vol. 44 (4), 2007)

"This weighty work is intended to offer comprehensive and authoritative coverage of the wide fields of optics and lasers. … Overall text is clear, well written and accompanied by appropriate tables and diagrams. … The book’s content emphasis is very much on material suitable for the optical practitioner. … a worthy addition to stock for any library supporting physics at a university or specialist level." (Gareth J. Johnson, Reference Reviews, Vol. 22 (2), 2008)

“I recommend this modern, comprehensive handbook to students, educators, engineers and scientists. The chapters are clearly written and include sophisticated illustrations that augment the text. The tables of data are also exemplary. The authors strike a good balance between the theory and implementation. The reader will appreciate the explanations of both the detailed mathematics and the physical aspects of the concepts. Each chapter contains pertinent references and an index.” (Barry R. Masters, Optics & Photonics News, November, 2012)