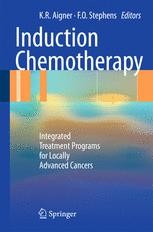 Induction chemotherapy, as part of an integrated plan of management for locally advanced cancers, is being practised throughout the world in independent, isolated departments in universities, teaching hospitals, and clinical schools. Frequently, however, teams are relatively unaware of the work being undertaken in other institutions, and this situation may slow further progress. This book aims to present the full range of management techniques and practices used in induction chemotherapy within one accessible volume. It provides up-to-date information on the pioneering and cutting edge practices employed in different institutions and documents the advantages of integrated treatment schedules. Patient selection is discussed, and each of the cancer types for which induction therapy has proved important is considered in detail. All who are responsible for the treatment of patients with locally advanced cancers will find this book to be an invaluable source of information. It will be particularly interesting for specialist oncologists aiming to set up and develop fully comprehensive cancer centres and for health administrators wishing to learn about the benefits of establishing such centres in strategic locations.

Prof. Dr. med. Karl Reinhard Aigner is Medical Director of the Department of Surgical Oncology in Medias Klinikum Burghausen, Bavaria. He had his surgical training in cardiovascular surgery at Friedrich-Alexander University in Erlangen. At Justus-Liebig University Giessen he specialized in surgical oncology, focusing on vascular techniques of drug delivery such as Implantofix and Jet Port catheters, and in 1981 first performed a technique of isolated perfusion of the liver with heart-lung machine in man. Furtheron he developed various techniques of segmental vascular isolation of body segments and organs, and the stopflow technique with adequately designed catheters. In 1982, together with Prof. Stephens from Sydney, he initiated the biannual International Congress of Regional Cancer Treatment (ICRCT) and from 1987 to 1991 was president of the International Society for Regional Cancer Therapy. From 1985 to 1998 he was managing editor of the International Journal Regional Cancer Treatment. He is author of numerous publications and book chapters, lectured and performed teaching operations on vascular perfusion techniques and oncological surgery in Europe the United States and Asia.

Frederick Oscar Stephens (MD, MS FRCS (Ed), FACS, FRACS) is former Professor of Surgical Oncology and Head of Department of Surgery, The University of Sydney, Australia. With other colleagues in Europe, UK, North America, South Africa, India, Japan and Tawain he has been a pioneer in the development of the principles of using integrated treatment modalities in management of locally advanced cancers. Advanced malignancies in limbs that previously required limb amputation can now be treated equally effectively without amputation in about 80% of patients. Oncologists in many cancer clinics worldwide are now achieving similarly improved results from the application of similar techniques and principles. He was the founding president of The International Society for Regional Cancer Therapy (1982) and has lectured extensively on regional cancer treatment and surgical oncology in Germany, Austria, France, England, Scotland, Wales, Ireland, America, Canada, Israel, Greece, Hungary, Japan and New Zealand as well as in his home country of Australia. He is the author of over 200 publications in medical journals, several book Chapters and two theses. Since retirement he has authored 4 books on cancers in general and specific cancers for lay people, and with Professor Aigner and other world experts has written The Basics of Oncology, a text for medical and paramedical practitioners and nurse oncologists. A little known international surgical contribution of Professor Stephens is that when he was a Senior Surgical Registrar in training in Aberdeen Scotland with Professor Hugh Dudley, he published the first paper on Outpatient Surgery under general anaesthesia in adults in Lancet 1961. Outpatient (Day Stay or Ambulatory Surgery) techniques and policy have now become standard practice worldwide making great savings in health budgets the world over.

“It provides very detailed descriptions of induction chemotherapy in all anatomic areas accompanied by very useful charts, graphs, and photographs. … It is written for specialists in oncologic care, including medical oncologists, radiation oncologists, and surgeons. It also would serve as an excellent reference for primary care physicians and general oncologists … . This is as good a book as I have seen on induction chemotherapy. It is a comprehensive work that also provides a nice historical perspective for students and practitioners … .” (Timothy K. Huyck, Doody’s Review Service, October, 2011)