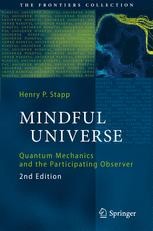 Quantum Mechanics and the Participating Observer

The classical mechanistic idea of nature that prevailed in science during the eighteenth and nineteenth centuries was an essentially mindless conception: the physically described aspects of nature were asserted to be completely determined by prior physically described aspects alone, with our conscious experiences entering only passively. During the twentieth century the classical concepts were found to be inadequate. In the new theory, quantum mechanics, our conscious experiences enter into the dynamics in specified ways not fixed by the physically described aspects alone. Consequences of this radical change in our understanding of the connection between mind and brain are described. This second edition contains two new chapters investigating the role of quantum phenomena in the problem of free will and in the placebo effect.

Author of over three hundred research papers on the mathematical, physical, and philosophical foundations of quantum mechanics, and a Springer book 'Mind, matter, and quantum mechanics'. Worked personally with W. Heisenberg, W. Pauli, and J.A. Wheeler on these issues. Invited author of entries about quantum theories consciousness in several currently about to appear encyclopedias. Invited plenary speaker at numerous international conferences. For book cover: Henry Stapp has spent his entire career working in frontier areas of theoretical physics. After completing his thesis work under Nobel Laureates Emilio Segré and Owen Chamberlain, he joined Wolfgang Pauli to tackle foundational issues. After Pauli's early death, he turned to von Neumann's ideas about the mathematical foundations of quantum theory. The essay 'Mind, Matter and Quantum Mechanics', that developed out of this work eventually evolved into Stapp's classic book bearing the same title. His deep interest in the quantum measurement problem led him to pursue extensive work pertaining to the influence of our conscious thoughts on physical processes occurring in our brains. The understandings achieved in this work have been described in many technical articles and now, in more accessible prose, in the present book.

"Stapp's book is a bold and original attack on the problem of consciousness and free will based on the openings provided by the laws of quantum mechanics. This is a serious and interesting attack on a truly fundamental problem."

"In his new book, Stapp insists that the "causal closure of the physical", in particular concerning quantum theory, is an untenable myth. He elaborates on ideas of Bohr, von Neumann, Heisenberg and, from a philosophical point of view, James and Whitehead to sketch a complex picture in which the physical and the mental are emphatically conditioned by each other. Stapp's wide-ranging proposal offers stimulating reading, a strong sense of conceptual coherence and intuitive appeal, and empirical predictions that deserve to be refined and tested."

A highly readable book of genuine wisdom by one of the foremost minds for our generation. The paradoxical enigma of consciousness and matter has been tackled by virtually every modern philosopher and many scientists as well. Unfortunately most philosophers have grounded their thinking in century old physics while most scientists fail to understand the nuances of philosophical thought. Here a foremost quantum physicist speaks to us not only from a profound understanding of physics, but with a sophistication about consciousness and philosophy of mind that few short of William James and Alfred North Whitehead have sustained. The result is a radical rethinking of issues as fundamental and vital as free will, ethics, the mind-body problem, and the dimensions of human nature itself.

Editor of Mind in Time: The Dynamics of Thought, Reality, and Consciousness

"Stapp has devoted some of the 17 chapters of the book to arguments for the need to use quantum theory in neuroscience, explanations of his theory, and discussions of the consistency of his theory with the ideas of William James and Alfred Whitehead. … This book has been written in a style that is clearly meant to make the book widely accessible… . Henry Stapp’s theory is worthy of attention, and this book provides a good introduction to it." (Imants Barušs, Journal of Scientific Exploration, Vol. 21 (3), 2008)

"In this book Stapp tackles the ‘mind-body problem’ (or rather the ‘mind-matter’ problem). … The book is certainly an enjoyable read (I read it in one sitting) … . Philosophers of mind should read this book because it frequently discusses elements of the contemporary debate in novel ways, and may trigger some entirely new debates. It will also provide a nice entrée into quantum theory … . Those interested in the philosophical foundations of physics will no doubt find it enjoyable … ." (Dean Rickles, Mathematical Reviews, Issue 2008 g)

“The aim of this book is to explain to educated lay readers various twentieth century developments in science from the viewpoint of both a quantum physicist and a philosopher, and to touch upon the social consequences of some (alleged) misrepresentations of contemporary scientific knowledge that continue to hold sway. … the author’s visionary ideas, original proposals and explanations, his speculations, and his wide spectrum of knowledge as displayed in the present book, made this collection of essays a highly captivating, inspiring and educating read.” (Werner Kleinert, Zentralblatt MATH, Vol. 1243, 2012)