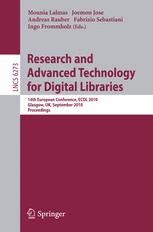 In the 14 years since its ?rst edition back in 1997, the European Conference on Research and Advanced Technology for Digital Libraries (ECDL) has become the reference meeting for an interdisciplinary community of researchers and practitioners whose professional activities revolve around the theme of d- th ital libraries. This volume contains the proceedings of ECDL 2010, the 14 conference in this series, which, following Pisa (1997), Heraklion (1998), Paris (1999),Lisbon(2000),Darmstadt(2001),Rome(2002),Trondheim(2003),Bath (2004), Vienna (2005), Alicante (2006), Budapest (2007), Aarhus (2008), and Corfu (2009), was held in Glasgow, UK, during September 6–10, 2010. th Asidefrombeingthe14 edition of ECDL, this was also the last, at least with this name since starting with 2011, ECDL will be renamed (so as to avoid acronym con?icts with the European Computer Driving Licence) to TPLD, standing for the Conference on Theory and Practice of Digital Libraries. We hope you all will join us for TPDL 2011 in Berlin! For ECDL 2010 separate calls for papers, posters and demos were issued, - sulting in the submission to the conference of 102 full papers, 40 posters and 13 demos. This year, for the full papers, ECDL experimented with a novel, two-tier reviewing model, with the aim of further improving the quality of the resu- ing program. A ?rst-tier Program Committee of 87 members was formed, and a further Senior Program Committee composed of 15 senior members of the DL community was set up.