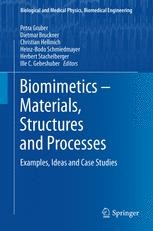 The book presents an outline of current activities in the field of biomimetics and integrates a variety of applications comprising biophysics, surface sciences, architecture and medicine. Biomimetics as innovation method is characterised by interdisciplinary information transfer from the life sciences to technical application fields aiming at increased performance, functionality and energy efficiency. The contributions of the book relate to the research areas: - Materials and structures in nanotechnology and biomaterials - Biomimetic approaches to develop new forms, construction principles and design methods in architecture - Information and dynamics in automation, neuroinformatics and biomechanics Readers will be informed about the latest research approaches and results in biomimetics with examples ranging from bionic nano-membranes to function-targeted design of tribological surfaces and the translation of natural auditory coding strategies.

Dietmar Bruckner works as assistant professor at the Institute of Computer Technology of the Vienna University of Technology, his main research areas are building automation and smart homes, Bayesian statistics, cognitive science, applications of neuro-psychoanalytical concepts for automation systems and intelligent and assistive environments for future living. He is engaged in IEEE, where he holds the positions of IES TC BACM Secretary and Section Austria Chapter Coordinator. He published three books, one journal paper and more than 20 conference papers. Christian Hellmich, studied at Vienna University of Technology (graduation in Civil Engineering, 1995, PhD in 1999), where he is currently Associate Professor, after a Postdoctoral Fellowhsip at M.I.T. (2000-2002). His broad interests in multidisciplinary approaches between engineering mechanics as his core competence and physics, chemistry, biology has helped to solve problems in civil and bioengineering, as documented in 12 book chapters, ~60 refereed journal publications, and more than 100 conference proceedings. Recipient of national and international awards, CH serves in various technical committees, and as Associate Editor of the Journal of Engineering Mechanics. Petra Gruber studied Architecture at the Vienna University of Technology (graduated with distinction 1999, PhD in 2008), where she was Assistant Professor from 2000-2008. In 2007 she was research fellow at The University of Reading, Center for Biomimetics. Since 2008 she works in her office transarch. Her research activities focus on innovation in architecture, using the method of biomimetics, and including traditional building typologies. Her approach to architecture is characterised by professional work in the field and interdisciplinary investigation. She has edited one book, published book chapters and articles in refereed journals, conference proceedings and public media. Heinz-Bodo Schmiedmayer studied Mechanical Engineering at the Vienna University of Technology (graduation 1987, PhD 1986) where he was Assistant Professor. He habilitated in 2000 and is Associate Professor for Biomechanics. His research interests include kinematics of joints and kinetic simulations of multi-body models of motion with a special focus on prosthetics and rehabilitation. He has published extensively in the field and is member of several scientific boards. Herbert Stachelberger studied Technical Chemistry at the Vienna University of Technology (PhD 1971 with disctinction) where he was Assistant Professor. He habilitated 1978 in the field of Technical Microscopy and is since 1984 full Professor for Botany, Technical Microscopy and Organic Raw Materials Science. He is member of several scientific boards and has published extensively covering various topics of microscopic and/or chemical investigations of materials of organic-biological origin. Since 2008 he is speaker of the TU BIONIK Center of Excellence. Ille C. Gebeshuber is performing research on the interface of biology and engineering, systems thinking and nanoscale characterization. Currently she works at the Institute of Microengineering anf Nanoelectronics at the Universiti Kebangsaan Malaysia. Her permanent position is at the Institute of Applied Physics at the Vienna University of Technology. Prof. Gebeshuber is also highly active in arts based research and scientific outreach. She is Associate Editor of the IMechE Journal of Mechanical Engineering Science, and editor of a new journal that deals with engineering views and approaches in various cultures. She is co- founder of the Vienna-based Center of Excellence for Biomimetics.