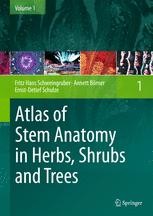 Atlas of Stem Anatomy in Herbs, Shrubs and Trees

This work, published in two volumes, contains descriptions of the wood and bark anatomies of 3000 dicotyledonous plants of 120 families, highlighting the anatomical and phylogenetic diversity of dicotyledonous plants of the Northern Hemisphere. The first volume principally treats families of the Early Angiosperms, Eudicots, Core Eudicots and Rosids, while the second concentrates on the Asterids.

Presented in Volume 1 are microsections of the xylem and phloem of herbs, shrubs and trees of 1200 species and 85 families of various life forms of the temperate zone along altitudinal gradients from the lowland at the Mediterranean coast to the alpine zone in Western Europe. The global perspective of the findings is underlined by the analysis of 500 species from the Caucasus, the Rocky Mountains and Andes, the subtropical zone on the Canary Islands, the arid zones in the Sahara, in Eurasia, Arabia and Southwest North America, and the boreal and arctic zones in Eurasia and Canada.

The presence of annual rings in all life forms demonstrates that herbs and dwarf shrubs are an excellent tool for the reconstruction of annual biomass production and the interannual dynamic of plant associations. The common principle of the anatomical expression of secondary growth is a key factor in understanding evolution and adaptation processes in all life forms, from the 2 cm tall whitlow grass (Draba arctica) in the arctic to the 40 m tall beech (Fagus sylvatica) in Central European managed forests. The study opens vast fields of research for dendrochronology, wood anatomy, taxonomy and ecology.

“This remarkable book is the first of two volumes that represent the fruit over 40 years work by Fritz Schweingruber on the stem anatomy of dicotyledonous herbs, shrubs and trees. … In summary, the Atlas of Stem Anatomy in Herbs, Shrubs and Trees is an important new contribution to our knowledge of stem anatomy, and particularly to our knowledge of the occurrence of secondary growth in so-called herbaceous plants.” (Bruce Kirchoff, Plant Science Bulletin, Vol. 57 (3), Fall, 2011)

“This is a stunning book, laden with top-quality colour photographs of both whole plants and photomicrographs. … a reference book and source of inspiration it should be on the shelf of any plant science institution’s library.” (Barry Meatyard, The Biologist, Vol. 59 (1), March, 2012)