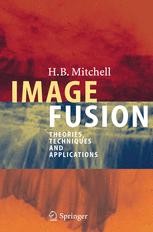 This textbook provides a comprehensive introduction to the theories, techniques and applications of image fusion. It is aimed at advanced undergraduate and first-year graduate students in electrical engineering and computer science. It should also be useful to practicing engineers who wish to learn the concepts of image fusion and use them in real-life applications.

The book is intended to be self-contained. No previous knowledge of image fusion is assumed, although some familiarity with elementary image processing and the basic tools of linear algebra is recommended. The book may also be used as a supplementary text for a course on advanced image processing.

Apart from two preliminary chapters, the book is divided into three parts. Part I deals with the conceptual theories and ideas which underlie image fusion. Particular emphasis is given to the concept of a common representational framework and includes detailed discussions on the techniques of image registration, radiometric calibration and semantic equivalence. Part II deals with a wide range of techniques and algorithms which are in common use in image fusion. Among the topics considered are: sub-space transformations, multi-resolution analysis, wavelets, ensemble learning, bagging, boosting, color spaces, image thresholding, Markov random fields, image similarity measures and the expectation-maximization algorithm. Together Parts I and II form an integrated and comprehensive overview of image fusion. Part III deals with applications. In it several real-life examples of image fusion are examined in detail, including panchromatic sharpening, ensemble color image segmentation and the Simultaneous Truth and Performance algorithm of Warfield et al.

The book is accompanied by a webpage from which supplementary material may be obtained. This includes support for course instructors and links to relevant matlab code.