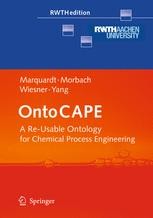 This book presents OntoCAPE, a formal domain ontology for chemical process engineering, which is based on a general upper ontology for engineering. The organization and structure of the ontology are depicted, and the conceptualizations of various topic areas are described in detail, including the areas of mereology, topology, systems theory, network systems, plant engineering, and others. Additionally, the rationale for choosing one particular conceptualization over the other is explicated, thus providing the reader with the necessary background knowledge for extending and customizing the ontology to his/her own purposes.

Finally, the usage of the ontology is explained, and some sample applications are presented.

Wolfgang Marquardt, born in 1956 in Germany, studied Chemical Engineering at the University of Stuttgart and graduated with the degree of a "Dipl-Ing. " in 1982. Subsequently, he worked for the Institute of System Dynamics and Control of the University of Stuttgart and completed his dissertation in 1988. He was honored with the Award of the Alumni Foundation of the University of Stuttgart (Freunde der Universität Stuttgart).
He left the University of Stuttgart in 1989 to do post-doctoral research on a NATO-scholarship at the UWPREL in the Department of Chemical Engineering at the University of Wisconsin-Madison. He was distinguished with the Arnold-Eucken-Preis of VDI-GVC for his accomplishments on the analysis and control of distillation processes in 1990.In 1991 to finish the "Habilitation" on "Dynamic Modelling and Simulation of Chemical Processes". In 1992, he moved to RWTH Aachen University of Technology where he was appointed to Professor for Process Systems Engineering. Since then he has build up a research group of about 30 people with various projects in different areas of process systems engineering.
In 1998, Wolfgang has been appointed a member of the North-Rhine-Westfalian Academy of Sciences (Nordrhein-Westfälische Akademie der Wissenschaften). In 2001, Wolfgang has been awarded the Leibniz-Preis 2001 of DFG, which is the most prestigious prize in science and engineering in Germany. Since 2004, he is a member of both the senate and the joint committee of DFG (German Research Foundation). His areas of interest: methods and computer-aids for process modeling, analysis and design emphasizing process dynamics, process monitoring, process operation and process control.

Jan Morbach, born in 1976 in Germany, studied Mechanical Engineering majoring Chemical Engineering at RWTH Aachen University and Carnegie Mellon University, Pittsburgh, and received his Diploma (Dipl.-Ing) in 2002. He worked at AVT – Process Systems Engineering RWTH Aachen from 2002 to 2007 as a research assistant. His areas of interest are: ontology engineering, knowledge management in chemical engineering, , and computer-aided process design. Since 2007, Jan works as a process engineer for Bayer Technology Services in area of conceptual design.

Aidong Yang, born in 1971 in China, received a B. Eng. degree from Hebei University of Technology in 1992 and a Ph.D. degree from Dalian University of Technology in 1997, both in Chemical Engineering. In his postdoctoral career, he worked for several institutions in the area of process systems engineering, with a focus on information modelling and mathematical modelling of chemical process systems. In particular, he was a research fellow at AVT-process systems Engineering RWTH Aachen from 1999 to 2004, where his research was mainly devoted to the development and applications of ontologies for process engineering. Aidong is currently a lecturer at Faculty of Engineering and Physical Sciences in University of Surrey, with research interests in areas including mathematical modelling and optimisation of process systems, application of knowledge engineering methods in process/product development and manufacturing, and integration of engineering software tools.

“Ontologies are key components in the realization of the semantic Web. … This book describes the design and structure of a large, complex ontology in chemical engineering, called OntoCAPE. … an excellent guide to an elaborate ontology. A researcher or knowledge engineer who plans to design an ontology could learn a lot from this volume. The items that specifically relate to chemistry or engineering issues do not interfere with the reader’s learning about the authors’ design and implementation choices.” (Anthony J. Duben, ACM Computing Reviews, January, 2011)