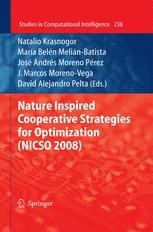 The inspiration from Biology and the Natural Evolution process has become a research area within computer science. For instance, the description of the artificial neuron given by McCulloch and Pitts was inspired from biological observations of neural mechanisms; the power of evolution in nature in the diverse species that make up our world has been related to a particular form of problem solving based on the idea of survival of the fittest; similarly, artificial immune systems, ant colony optimisation, automated self-assembling programming, membrane computing, etc. also have their roots in natural phenomena.

The first and second editions of the International Workshop on Nature Inspired Cooperative Strategies for Optimization (NICSO), were held in Granada, Spain, 2006, and in Acireale, Italy, 2007, respectively. As in these two previous editions, the aim of NICSO 2008, held in Tenerife, Spain, was to provide a forum were the latest ideas and state of the art research related to nature inspired cooperative strategies for problem solving were discussed.

The contributions collected in this book were strictly peer reviewed by at least three members of the international programme committee, to whom we are indebted for their support and assistance. The topics covered by the contributions include nature-inspired techniques like Genetic Algorithms, Ant Colonies, Amorphous Computing, Artificial Immune Systems, Evolutionary Robotics, Evolvable Systems, Membrane Computing, Quantum Computing, Software Self Assembly, Swarm Intelligence, etc.