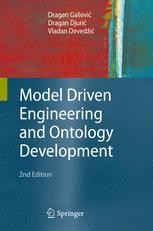 Defining a formal domain ontology is generally considered a useful, not to say necessary step in almost every software project. This is because software deals with ideas rather than with self-evident physical artefacts. However, this development step is hardly ever done, as ontologies rely on well-defined and semantically powerful AI concepts such as description logics or rule-based systems, and most software engineers are largely unfamiliar with these.

Gaševic and his co-authors try to fill this gap by detailing how to use model-driven engineering for ontology development on the Semantic Web. Part I of their book describes existing technologies, tools, and standards like XML, RDF, OWL, MDA, and UML. Part II presents the first detailed description of OMG's new ODM (Ontology Definition Metamodel) initiative, a specification which is expected to be in the form of an OMG language like UML. Finally, Part III is dedicated to applications and practical aspects of developing ontologies using MDA-based languages.

For this second edition, the descriptions of the related standards (like MOF, ODM, OCL, and OWL) have been revised and updated; new chapters introducing the basic principles of model-driven engineering, recent research results on metamodeling Semantic Web rule languages, an introduction to the Atlas Transformation Language (ATL) and its tool support, and, last but not least, many new examples have been added.

Dragan Gasevic is an assistant professor in the School of Computing and Information Systems at Athabasca University in Canada and an Adjunct Professor at Simon Fraser University in Canada. He is a recipient of Alberta Ingenuity's 2008 New Faculty Award. His research interests include semantic technologies, software language engineering, and learning technologies.

"The central theme of this book is the definition and application of ontologies for developing software systems. … The presentation style is clear and accessible … . This book provides adequate guidelines for enjoying the semantic Web’s benefits, and warns of the potential dangers of its misuse. It is well written, innovative, and definitely recommended as a book to return to from time to time, to gather some fresh ideas and continue working on their implementation." (M. Ivanovi, Computing Reviews, January, 2007)

“The book is equally suited to those who merely want to be informed of the relevant technological landscape, to practitioners dealing with concrete problems, and to researchers seeking pointers to potentially fruitful areas of research. The writing is technical yet clear and accessible, illustrated throughout with useful and easily digestible examples.” (from the Foreword by Bran Selic, IBM Rational Software, Canada)

“I do not know another book that offers such a high quality insight into UML and ontologies“ (Steffen Staab, U Koblenz, Germany)

“The authors offer not only high level conceptual presentations, but also implementation-level coverage of the presented technologies, and even hands-on guidance to their practical application.“ (Jean Bézivin, U Nantes, France)