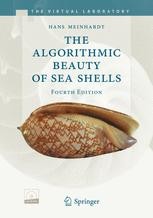 The Algorithmic Beauty of Sea Shells

The patterns on the shells of tropical sea snails are not only compellingly beautiful but also tell a tale of biological development. The decorative patterns are records of their own genesis, which follows laws like those of dune formation or the spread of a flu epidemic. Hans Meinhardt has analyzed the dynamical processes that form these patterns and retraced them faithfully in computer simulations. His book is exciting not only for the astonishing scientific knowledge it reveals but also for its fascinating pictures.

Review of the 4th edition: It is a strikingly beautiful book, with more than a hundred color illustrations of patterns on mollusk shells, side by side with the computer simulations that reproduce them. This bestiary of pattern formation includes stripes (straight or produced by traveling waves), dots, drops, triangles, and meshwork combined in any imaginable way. It is truly remarkable that this diversity of patterns seems to have arisen in the absence of any selective pressure, as the animals that express them spend their lives buried in mud or sand. Thus, these patterns are in essence a manifestation of Nature at play. Meinhardt has a great knack for explaining pattern-forming mechanisms in a non-technical way. In the first few chapters of his book he introduces us to the basic elements of his model in accessible and vivid terms. He shows how local non-linear self-activation combined with a rapidly diffusible repressor (or limiting substrate) leads to the formation of dots and stripes from homogeneous initial conditions, a phenomenon first described by Turing in 1952 as diffusion-driven instability. He then goes on to explain how oscillating patterns and traveling waves can be produced by the same basic model with different decay and diffusion rates. Here, the author and the book are at their best. Johannes Jaeger in: Bioessays 32: 638–640, 2010 WILEY Periodicals, Inc., DOI 10.1002/bies.201000031 From the reviews of the third edition:

This is a serious volume on the mathematical modeling of sea shell patterns. … This volume takes a rigorous approach, progressing systematically … . It would make a great text for either a course at the upper undergraduate or graduate level in mathematics or biology designed around it. It would also be a good supplemental text for a course in dynamical systems, differential equations … . It has left me with a new appreciation, wonder and curiosity about the myriad patterns on shells … ." (Amy Shell-Gellasch, MAA online, January, 2005)