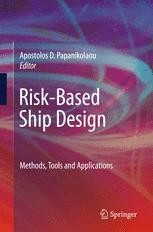 Risk-based ship design is a new scientific and engineering field of growing interest to researchers, engineers and professionals from various disciplines related to ship design, construction, operation and regulation. The main motivation to use risk-based approaches is twofold: implement a novel ship design which is considered safe but - for some formal, regulatory reason - cannot be approved today and/or rationally optimise an existing design with respect to safety, without compromising on efficiency and performance. It is a clear direction that all future technological and regulatory (International Maritime Organisation) developments regarding ship design and operation will go through risk-based procedures, which are known and well established in other industries (e.g. nuclear, aviation).

The present book derives from the knowledge gained in the course of the project SAFEDOR (Design, Operation and Regulation for Safety), an Integrated Project under the 6th framework programme of the European Commission (IP 516278). The book aims to provide an understanding of the fundamentals and details of the integration of risk-based approaches into the ship design process. The book facilitates the transfer of knowledge from recent research work to the wider maritime community and advances scientific approaches dealing with risk-based design and ship safety.

Apostolos D. Papanikolaou studied Naval Architecture & Marine Engineering at the Technical University of Berlin (Germany), where he received Habilitation (Lecturer) degree in 1981. He served as Tutor, Scientific Assistant, Research Associate and Lecturer (Privat-Dozent) at the Chair of Ship Theory and Ship Design of the Technical University of Berlin in the period 1969 to 1984, Associate Professor at the Department of Ocean Engineering of the University of Hawaii (USA) 1981/82 and 1984/85 and as Visiting Professor at the Departments of Naval Architecture and Ocean Engineering of the Universities of Osaka (Japan), Hamburg (Germany), Berlin (Germany), Hawaii (USA) and Strathclyde (United Kingdom) (1991/1993/1994/1999/2000). He was elected Assoc. Professor at NTUA in 1985 and was promoted to Full Professor in 1988. He is Head of the Ship Design Laboratory since the date of the foundation of the Laboratory in 1990.

He received various prizes, awards and fellowships from a variety of governmental and private foundations in Germany, Japan the United Kingdom. In 1994 his research team received the 1st prize award in an international university competition for the development of an innovative shortsea transport system, namely the "Development of a SWATH Multipurpose Container Carrier for Shortsea Shipping in Europe - The Integrated Intermodal System SMUCC", International Shipping Exhibition and Conference "Schiff-Maschine-Meerestechnik - SEA 2000" (Hamburg, Germany). In April 2000 his research team received the 1st joint prize award in the annual RINA/Lloyd's SAFER SHIP competition organized by the Royal Institution of Naval Architects (London, United Kingdom) for its proposal "Improved Guidance to the Master for Avoiding Dangerous Situations in Extreme Seas".

His educational, research and professional activities cover a broad area of Naval Architecture and Ocean Engineering. He was and is Principal Investigator of a large variety of funded research work regarding the design and optimization of conventional and unconventional vessels, the hydrodynamic analysis and assessment of the calm water performance and the seakeeping behavior of ships, the stability and safety of ships and the regulatory developments of the International Maritime Organization (IMO). His activities are documented by an extensive publication record of scientific papers, reports and papers at international conferences (over 208 publications, stand January 2000), the heading of large number of funded national and international (EU) projects (30 projects: completed, 8: running) and the supervision of diploma and dissertation theses (over 104 completed diploma theses, 3 completed dissertation theses and 2 under completion).

He was Chairman of the Executive Committee of WEGEMT (European Association of Universities in Marine Technology) for two consecutive periods (1993-1999) and President of the Hellenic Institute of Marine Technology (1994-1998). He is member of the international ITTC Stability Committee, Technical Advisor to the Greek delegation of IMO with major contributions at the SOLAS 95 convention (safety of Ro-Ro passenger vessels), MSC 70 (safety of bulkcarriers), various committees of SLF (harmonisation of stability rules), and to the Mediterranean Group of Passenger Shipowners (MEDGROUP).