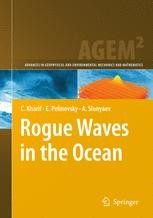 Rogue Waves in the Ocean

“It came from nowhere, snapping giant ships in two. No one believed the survivors . . . until now” —New Scientist magazine cover, June 30, 2001 Rogue waves are the focus of this book. They are among the waves naturally - served by people on the sea surface that represent an inseparable feature of the Ocean. Rogue waves appear from nowhere, cause danger, and disappear at once. They may occur on the surface of a relatively calm sea and not reach very high amplitudes, but still be fatal for ships and crew due to their unexpectedness and abnormal features. Seamen are known to be unsurpassed authors of exciting and horrifying stories about the sea and sea waves. This could explain why, despite the increasing number of documented cases, that sailors’ observations of “walls of - ter” have been considered ctitious for a while. These stories are now addressed again due to the amount of doubtless evidence of the existence of the phenomenon, but still without suf cient information to - able interested researchers and engineers to completely understand it. The billows appear suddenly, exceeding the surrounding waves by two times their size and more, and obtaining many names: abnormal, exceptional, extreme, giant, huge, s- den, episodic, freak, monster, rogue, vicious, killer, mad- or rabid-dog waves, cape rollers, holes in the sea, walls of water, three sisters, etc.

“This book is sure to appeal to those interested in rogue waves from a variety of disciplines. The authors have provided a thorough overview of observations of rogue waves, ranging from frightening experiences at sea to laboratory experiments. Those interested in the physics of nonlinear water waves will also find a nice overview of the topic as it relates to the generation of deep and shallow-water rogue waves. Overall, this book should satisfy any scientist’s or student’s curiosity of this interesting phenomenon.”­­­ (Eric L. Geist, Pure and Applied Geophysics, Vol. 168, 2011)

“The book, designed for Master’s and Ph.D. students, as well as researchers and engineers in the fields of nonlinear waves, fluid mechanics, physical oceanography, ocean and coastal engineering, and applied mathematics, is structured in six chapters. … Rogue waves in the ocean, which well describes the state of the art in the field, also provides a very useful compendium of knowledge, mathematical tools, and interpretative approaches for rogue waves and similar steep oceanic water waves.” (Maurizio Brocchini, Mathematical Reviews, Issue 2012 g)