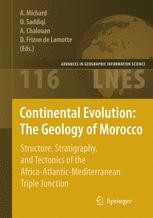 Continental Evolution: The Geology of Morocco

Structure, Stratigraphy, and Tectonics of the Africa-Atlantic-Mediterranean Triple Junction

Morocco is one of the most fascinating lands in the world from the point of view of its geological structure and evolution. Our knowledge on the geology of the country has been greatly improved during the last decades, based on numerous seismic profiles and boreholes, seismological analysis of focal mechanisms, seismic tomography, gravimetric/geodetic modelling and, on the other hand, based on a big National Program of Geological Mapping including modern geochemical analyses (trace elements) and reliable isotopic datings (39Ar-40Ar, U-Pb zircon, Sm-Nd, etc). Moreover, a number of academic studies have been performed in relation with the increasing number of Moroccan universities.

Accordingly, there was an utmost urgency to undertake a new treatise of Moroccan geology which could substitute for the classical Eléments de géologie marocaine, published in 1976 by A. Michard in the Notes et Mémoires du Service géologique du Maroc (re-edited twice since 1976, with more than 6000 copies sold, and… translated in Japanese for engineers!). A new treatise has been prepared between April 2006 and July 2007 under the coordination of A. Michard, assisted by O. Saddiqi, and A. Chalouan, by a wide panel of authors from Morocco, France or Belgium among the best connoisseurs of the country. In order to emphasize the general interest of the book, we finally retain the following title: Continental Evolution: The Geology of Morocco. Structure, Stratigraphy, and Tectonics of the Africa-Atlantic-Mediterranean Triple junction.

The editing and production of this book was supported by the following organisations:

The Geological Society of  France (SGF)

The National Office of Hydrocarbons and Mines of Morocco (ONHYM)

André Michard was a professor of structural geology at the Universities of Rabat, Strasbourg, Paris-Orsay and Ecole Normale Supérieure. André integrated the Ecole Normale Supérieure in 1955. He was graduated Agrégé de l’Université in 1959, and received his Doctorat d’Etat in Earth Sciences from the University of Paris-Sorbonne in 1967. His work centers on tectonics and metamorphic evolution of the Mediterranean Alpine belts and Oman Mountains. He published in 1976 a book on Moroccan geology and subsequently was awarded Ouissam Alaoui Officer. He directed a dozen of PhD theses on the Variscan and Rif belt in Morocco (besides others in he Alps), sharing for years the responsibility of cooperative programs with Ahmed Chalouan and Omar Saddiqi. After André retired in 1999, he kept publishing research papers dealing with Alpine and Moroccan geology (Rif and Eastern Anti-Atlas).

Ahmed Chalouan is a professor of structural geology at the Mohamed V University of Rabat. He received his Doctorat d’Etat in geology from the University of Strasbourg, France, in 1986. Ahmed conducts studies related to the tectonic evolution of the Rif belt and the structural analysis of some key areas of the belt such as its front (Rides prérifaines) or the Strait of Gibraltar in collaboration with foreign laboratories (Paris ENS, University of Granada). His research interests include petroleum geology in northern Morocco in collaboration with ONHYM and Rice University Houston.

Omar Saddiqi is a professor of structural geology, head of the Thermochronological laboratory of the University Hassan II of Casablanca Aïn Chok. He received his Doctorat de 3ème cycle from the University of Strasbourg in 1988 and his Doctorat d’Etat from the University of Casablanca in 1995.His research works included paleomagnetic studies in the Gibraltar Arc and Oman Mountains, as well as fission track analysis in the ophiolite from the latter belt, and in the last years in the basement of the Moroccan Atlantic margin. Omar develops his research programs in close association with the geological labs of ENS Paris, Univ. Cergy-Pontoise and Paris-Orsay, and Univ. of Bordeaux.

Dominique Frizon de Lamotte is Professor of Earth Sciences at the University of Cergy-Pontoise (France). He received a “Doctorat d’Etat” from the University Pierre-et-Marie-Curie (Paris) in 1985. After a two years (1978–1980) stay as a lecturer at Mohamed-V University, Rabat, he joined the university of Reims (1980–1987) then the university Paris-Sud (Orsay) (1987–1991). During this period, he was involved in the Rif mapping project of the Geological Survey of Morocco. He was appointed to the Cergy-Pontoise University in 1991 and set up the Department of Earth Sciences of this university. He is currently in charge of a research team (belonging to the Laboratoire de Tectonique, CNRS UMR 7072) which develops integrated approaches combining field geology, physics of rocks and modelling to investigate inverted sedimentary basins. His personal research focuses on two main points: (1) kinematics of fold-thrust structures and reservoir evolution in complex tectonic environments and (2) Geodynamics of West Mediterranean and Middle East.