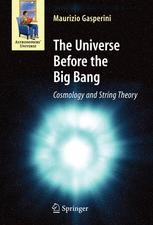 The Universe Before the Big Bang

Terms such as "expanding Universe", "big bang", and "initial singularity", are nowadays part of our common language. The idea that the Universe we observe today originated from an enormous explosion (big bang) is now well known and widely accepted, at all levels, in modern popular culture. But what happens to the Universe before the big bang? And would it make any sense at all to ask such a question? In fact, recent progress in theoretical physics, and in particular in String Theory, suggests answers to the above questions, providing us with mathematical tools able in principle to reconstruct the history of the Universe even for times before the big bang.

In the emerging cosmological scenario the Universe, at the epoch of the big bang, instead of being a "new born baby" was actually a rather "aged" creature in the middle of its possibly infinitely enduring evolution. The aim of this book is to convey this picture in non-technical language accessible also to non-specialists. The author, himself a leading cosmologist, draws attention to ongoing and future observations that might reveal relics of an era before the big bang.

Maurizio Gasperini is Professor of Theoretical Physics at the Physics Department of the University of Bari, Italy. He is the author of 150 publications on gravitational theory, high-energy physics, and cosmology, and has twice won an "Award for Essays on Gravitation" from the Gravity Research Foundation (1996 and 1998). His former posts include a permanent position in the Department of Theoretical Physics at the University of Turin, and two appointments as Scientific Associate at CERN, Theory Division (1993 and 1996). Here, in collaboration with Gabriele Veneziano, he formulated and developed an early-cosmology scenario based on the symmetries of string theory.

What happens to the big bang singularity within string theory? Did time have a beginning? These and other pre-eminent questions, whose implications go far beyond the boundaries of physics and even of science, lie at the forefront of today's research in theoretical particle physics and cosmology. Maurizio Gasperini succeeds in this book in drawing a thorough - yet very accessible and captivating - panorama of the various answers that have so far emerged to those basic questions, and of the cosmological observations which may soon allow a stringent test of our most advanced theoretical ideas.

"Gasperini … describes how string theory can be used to describe a pre-big-bang era that gives birth to a big bang, resolving dilemmas of standard cosmology and predicting a testable remnant of gravitational radiation that should pervade the universe now. … Summing Up: Recommended. Upper-division undergraduates." (M. Dickinson, Choice, Vol. 46 (7), March, 2009)

"This book is both lucid and comprehensive. … the book’s basic material derives from the author’s university lectures and seminars, its stated aim now is to make the topic accessible to a readership with typically no more than a knowledge of high-school physics. … If you are interested in what String Theory has to offer cosmology, and are prepared to put some effort into finding out … this could be a useful text for you." (Dave Pike, The Observatory, Vol. 129 (1210), June, 2009)

"This book grew out of a series of lectures and seminars held over several years in various Italian universities. … The book is addressed, in particular, to all those readers with at least a basic knowledge of physics … but not necessarily equipped with an academic scientific background. … this book is detailed enough to enable the reader to understand the most recent cosmological models, the key underlying ideas and how they can be tested using the experimental tools provided by current technology." (Roland Carchon, Belgian Physical Society Magazine, Issue 2, June, 2009)