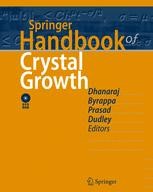 Over the years, many successful attempts have been made to describe the art and science of crystal growth. Most modern advances in semiconductor and optical devices would not have been possible without the development of many elemental, binary, ternary, and other compound crystals of varying properties and large sizes. The objective of the Springer Handbook of Crystal Growth is to present state-of-the-art knowledge of both bulk and thin-film crystal growth. The goal is to make readers understand the basics of the commonly employed growth processes, materials produced, and defects generated.
Almost 100 leading scientists, researchers, and engineers from 22 different countries from academia and industry have been selected to write chapters on the topics of their expertise. They have written 52 chapters on the fundamentals of bulk crystal growth from the melt, solution, and vapor, epitaxial growth, modeling of growth processes and defects, techniques of defect characterization as well as some contemporary special topics. This unique effort will provide readers with a fundamental understanding of crystal growth with the latest instrumentation and techniques available for crystal and thin-film fabrication.
It is written and compiled for professionals and practitioners, materials scientists, physicists, and chemists at universities and in industrial research and production. Key Topics Crystal growth and characterization fundamentals Bulk crystal growth from the melt, solution, and vapor Thin-film epitaxial growth Modeling of growth processes Defect formation and morphology Crystalline material characterization and analysis Features Covers basic concepts, materials, properties, and fabrication. Contains over 1,200 color illustrations. Numerous comprehensive tables. Features exhaustive references to approved data. Fully searchable DVD-ROM for quick access to data.

Dr. Govindhan Dhanaraj is the Manager of Crystal Growth Technologies at Advanced Renewable Energy Company (ARC Energy) at Nashua, New Hampshire (USA) focusing on the growth of large size sapphire crystals for LED lighting applications, characterization and related crystal growth furnace development. He received his PhD from the Indian Institute of Science, Bangalore and his Master of Science from Anna University (India). Immediately after his doctoral degree, Dr. Dhanaraj joined a National Laboratory, presently known as Rajaramanna Center for Advanced Technology in India, where he established an advanced Crystal Growth Laboratory for the growth of optical and laser crystals. Prior to joining ARC Energy, Dr. Dhanaraj served as a Research Professor at the Department of Materials Science and Engineering, Stony Brook University, NY, and also held a position of Research Assistant Professor at Hampton University, VA. During his 25 years of focused expertise in crystal growth research, he has developed optical, laser and semiconductor bulk crystals and SiC epitaxial films using solution, flux, Czochralski, Bridgeman, gel and vapor methods, and characterized them using x-ray topography, synchrotron topography, chemical etching and optical and atomic force microscopic techniques. He co-organized a symposium on Industrial Crystal Growth under the 17th American Conference on Crystal Growth and Epitaxy in conjunction with the 14th US Biennial Workshop on Organometallic Vapor Phase Epitaxy held at Lake Geneva, WI in 2009. Dr. Dhanaraj has delivered invited lectures and also served as session chairman in many crystal growth and materials science meetings. He has published over 100 papers and his research articles have attracted over 250 rich citations. Based on his accomplishments in crystal growth, he has been awarded with the most prestigious Extraordinary Ability Category O1 VISA status by United States BCIS.

Kullaiah Byrappa received his Doctor’s degree in Crystal Growth from the Moscow State University, Moscow in 1981. He is Professor of Materials Science, Head of the Crystal Growth Laboratory, and Director of the Internal Quality Assurance Cell of the University of Mysore, India. His current research is in crystal engineering of polyscale materials through novel solution processing routes, particularly covering hydrothermal, solvothermal and supercritical methods. Professor Byrappa has co-authored the Handbook of Hydrothermal Technology, and edited 4 books as well as two special editions of Journal of Materials Science, and published 180 research papers including 26 invited reviews and book chapters on various aspects of novel routes of solution processing. Professor Byrappa has delivered over 60 keynote and invited lectures at International Conferences, and several hundreds of colloquia and seminars at various institutions around the world. He has also served as chair and co-chair for numerous international conferences. He is a Fellow of the World Academy of Ceramics. Professor Byrappa is serving in several international committees and commissions related to crystallography, crystal growth, and materials science. He is the Founder Secretary of the International Solvothermal and Hydrothermal Association. Professor Byrappa is a recipient of several awards such as the Sir C.V. Raman Award, Materials Research Society of India Medal, and the Golden Jubilee Award of the University of Mysore.

Vishwanath “Vish” Prasad is the Vice President for Research and Economic Development and Professor of Mechanical and Energy Engineering at the University of North Texas (UNT), one of the largest university in the state of Texas. He received his PhD from the University of Delaware (USA), his Masters of Technology from the Indian Institute of Technology, Kanpur, and his bachelor’s from Patna University in India all in Mechanical Engineering. Prior to joining UNT in 2007, Dr. Prasad served as the Dean at Florida International University (FIU) in Miami, where he also held the position of Distinguished Professor of Engineering. Previously, he has served as a Leading Professor of Mechanical Engineering at Stony Brook University of New York, as an Associate Professor and Assistant Professor at Columbia University. He has received many special recognitions for his contributions to engineering education. Dr. Prasad’s research interests include thermo-fluid sciences, energy systems, electronic materials, and computational materials processing. He has published over 200 articles, edited/coedited several books and organized numerous conferences, symposia, and workshops. He serves as the lead editor of the Annual Review of Heat Transfer. In the past, he has served as an Associate Editor of the ASME Journal of Heat. Dr. Prasad is an elected Fellow of the American Society of Mechanical Engineers (ASME), and has served as a member of the USRA Microgravity Research Council. Dr. Prasad’s research has focused on bulk growth of silicon, III-V compounds, and silicon carbide; growth of large diameter Si tube; design of crystal growth systems; and sputtering and chemical vapor deposition of thin films. He is also credited to initiate research on wire saw cutting of large crystals to produce wafers with much reduced material loss. Dr. Prasad’s research has been well funded by US National Science Foundation (NSF), US Department of Defense, US Department of Energy, and industry.

Michael Dudley received his Doctor’s Degree in Engineering from Warwick University, UK, in 1982. He is Professor and Chair of the Materials Science and Engineering Department at Stony Brook University, New York, USA. He is director of the Stony Brook Synchrotron Topography Facility at the National Synchrotron Light Source at Brookhaven National Laboratory, Upton New York. His current research focuses on crystal growth and characterization of defect structures in single crystals with a view to determining their origins. The primary technique used is synchrotron topography which enables analysis of defects and generalized strain fields in single crystals in general, with particular emphasis on semiconductor, optoelectronic, and optical crystals. Establishing the relationship between crystal growth conditions and resulting defect distributions is a particular thrust area of interest to Dudley, as is the correlation between electronic/optoelectronic device performance and defect distribution. Other techniques routinely used in such analysis include transmission electron microscopy, high resolution triple-axis x-ray diffraction, atomic force microscopy, scanning electron microscopy, Nomarski optical microscopy, conventional optical microscopy, IR microscopy and fluorescent laser scanning confocal microscopy. Dudley’s group has played a prominent role in the development of SiC and AlN growth, characterizing crystals grown by many of the academic and commercial entities involved enabling optimization of crystal quality. He has co-authored some 315 refereed articles and 12 book chapters and edited 5 books. He is currently a member of the Editorial Board of Journal of Applied Physics and Applied Physics Letters and has served as Chair or Co-Chair for numerous international conferences.