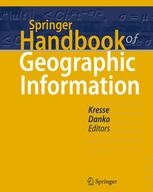 Computer science provides a powerful tool that was virtually unknown three generations ago. Some of the classical fields of knowledge are geodesy (surveying), cartography, and geography. Electronics have revolutionized geodetic methods. Cartography has faced the dominance of the computer that results in simplified cartographic products. All three fields make use of basic components such as the Internet and databases.

The Springer Handbook of Geographic Information is written for scientists at universities and industry as well as advanced and PhD students.

Wolfgang Kresse is a Professor for Geographic Information Systems and Photogrammetry at the University of Applied Sciences in Neubrandenburg, Germany. As a visiting professor he was affiliated to the Canada Centre for Remote Sensing in Ottawa (2002/2003) and to the University of Maine, USA (2008/2009). Formerly, he worked as a software developer and customer trainer for Carl Zeiss Company with focus on graphics, photogrammetry, and data exchange. Wolfgang Kresse is the leading author of the book ISO Standards for Geographic Information published by Springer.

He is the project leader of the ISO 19159, Calibration and validation of remote sensing imagery sensors and data, in the ISO/TC 211, Geographic information / Geomatics.  He has been involved in the development of ISO 19130, Imagery sensor models for geopositioning, and in standardization activities of the International Society of Photogrammetry and Remote Sensing (ISPRS) as well as in the German Society for Photogrammetry and Remote Sensing.

Wolfgang Kresse holds a Diploma Degree in Geodesy and a Doctor-Degree in Digital Cartography, both of the University of Bonn, Germany.

David Danko is a Senior Consultant for GIS standards.  In this capacity he ensures that ESRI software and services are interoperable and comply with the appropriate national, international, and industry standards. He represents ESRI on the OGC Planning Committ

As a physical scientist–senior standards manager with DMA, he was responsible for developing and managing agency policies and programs to ensure standardization and interoperability between DMA imagery and geospatial systems, U.S. DoD agencies, U.S. civilian agencies, and the military and civilian geospatial information communities of other nations. He previously served as Project Manager for an international research and development initiative that resulted in the development of the vector product format (VPF) military standard and the digital chart of the World (DCW); the DCW was the first in a new series of digital vector products on CD–ROM.  Earlier in his career he worked in the areas of remote sensing, analytical triangulation, imagery data extraction and cartographic production.

“This book provides an encyclopedic survey of geoinformation through 31 chapters contributed by specialists from around the globe. … This book is both timely and up-to-date. The editors have done a very good job spanning the relevant topics for such a handbook, and each chapter is very detailed technically … . This volume is intended as a reference manual for specialists in this area or for researchers needing specialist knowledge. Summing Up: Recommended. Graduate students, researchers/faculty, and professionals/practitioners.” (R. A. Kolvoord, Choice, Vol. 50 (5), January, 2013)

“It attempts to provide a comprehensive overview of the state of the art and current practices in the generation, analysis, and distribution of geographic information. … This book would be a good starting place for novices in the field. The exposition of the material is more suited for professionals with a technological focus, such as technologists, engineers, analysts, and cartographers, but managers looking for reasonably comprehensive tutorials about the specific topics covered in this book should find the relevant sections useful.” (R. M. Malyankar, ACM Computing Reviews, January, 2013)