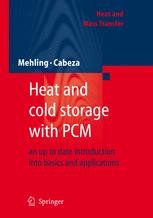 Heat and cold storage with PCM

An up to date introduction into basics and applications

Latent heat storage with phase change materials (PCM) has the potential to improve significantly the efficiency of heat and cold storages and to reduce their size considerably. The book is an introduction into the field for researchers and students. It summarizes and explains the basics, general concepts, and applications with examples in a single text. For a better understanding, many derivations, graphs and tables are included. All aspects from materials analysis and modification, storage design, storage integration, and different application examples are covered. Special focus is on applications in buildings.

Since 1995 working at the Bavarian Center for applied Energy Research, since 1998 Group leader "Latent heat storage"

Author or co-author of about 50 publications, with more than 20 reviewed

Luisa F. Cabeza is Professor on Thermal Engineering at the University of Lleida (Lleida, Spain). She graduated on Chemical Engineering and Industrial Engineering in 1992 at University Ramon Llull (Barcelona, Spain), in 1995 she got an MBA and in 1996 her PhD on Industrial Engineering at the same university. From 1996 to 1998 she worked at the Eastern Regional Research Center, Agricultural Research Service, United States Department of Agriculture (Philadelphia, USA). In 1999 she joined the University of Lleida as Assistant Professor, and she became Full Professor in 2006. She lead the Research Group on Applied Energy at the same university, today a research group with 25 researchers, recognised by several Spanish Agencies for its work.