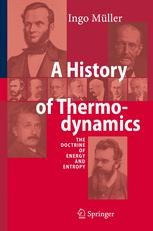 A History of Thermodynamics

The Doctrine of Energy and Entropy

The development of thermodynamics in the second half of the 19th century has had a strong impact on both technology and natural philosophy.

It is true that the steam engine for the conversion of heat into work existed before thermodynamics was developed as a branch of physics. However, the systematic theory improved the conversion process, and it succeeded in developing other processes essential to modern life, notably refrigeration and rectification. So, altogether thermodynamics has provided humanity with cheap energy, and cheap fuel, -- consequently with cheap, and abundant, and unspoiled food. Thus thermodynamics has made populations grow, and life expectancy increase beyond anything people could possibly have imagined 200 years ago.

At the same time thermodynamics has uncovered the precarious balance between determinism and stochasticity which is essential to processes on earth, including life. The competition of those intentions is described by the doctrine of energy and entropy in thermodynamics; energy tends to force a system into one single state, and entropy tends to spread the system evenly over all possible states. These competing tendencies are weighted by temperature such that minimal energy determines cold systems.

The knowledge gained by thermodynamic research led to quantum mechanics, whose rules become predominant at low temperatures, and to stellar physics, where temperature is high enough to make relativity theory essential.

The expansion of thermodynamic technology and natural philosophy is reviewed in the book along with the struggles and fates of some of the engineers and physicists who pioneered the development.

"Müller … summarizes the historical development of thermodynamic concepts, going into great depth to detail how certain discoveries were interconnected and how numerous researchers developed these theories based on current available knowledge. … Readers will appreciate how researchers in the 19th century had to develop basic concepts … . Summing Up: Recommended. Upper-division undergraduates through professionals." (H. Giesche, CHOICE, Vol. 45 (2), 2007)

"An exhaustive history and presentation of current state of research in the subject of thermodynamics. … This book is too good … . The author is an important leader in this field, with most impressive record of research publications. This is a great book, which should be in the library of any scientist interested in thermodynamics. It is easy to read … . It contains a lot of information about thermodynamics, certainly the history, and biographies of prominent creators of our knowledge." (Vadim Komkov, Zentralblatt MATH, Vol. 1131 (9), 2008)