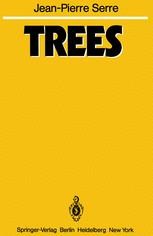 The present book is an English translation of "Arbres, Amalgames, SL(2)", published in 1977 by J-P.Serre, and written with the collaboration of H.Bass. The first chapter describes the "arboreal dictionary" between graphs of groups and group actions on trees. The second chapter gives applications to the Bruhat-Tits tree of SL(2) over a local field.

"In the case of an author like Serre, there is almost no need to underline the book's qualities of elegance and precision: over and above these, it provides abundant links to other topics, particularly by means of the remarks and the numerous exercises which, for the most part, are not easy to solve, but genuinely augment the content of the book. The greatest quality of this book however, is, in my opinion, that one finds in it many new and interesting ideas of very considerable substance, but presented in their very simplest form."
H. Behr, Frankfurt in: Jahresbericht der DMV, (84/3) 1982

From the reviews: "Serre's notes on groups acting on trees have appeared in various forms (all in French) over the past ten years and they have had a profound influence on the development of many areas, for example, the theory of ends of discrete groups. This fine translation is very welcome and I strongly recommend it as an introduction to an important subject. In Chapter I, which is self-contained, the pace is fairly gentle. The author proves the fundamental theorem for the special cases of free groups and tree products before dealing with the (rather difficult) proof of the general case." (A.W. Mason in Proceedings of the Edinburgh Mathematical Society 1982)

"The book under review is the … second printing of the English edition of 1980 … . The seminal ideas of the book played an important role in the development of group theory since the seventies … . Nowadays the book already can be called classical. … Several generations of mathematicians learned geometric ideas in group theory from this stimulating book; without doubt, the new edition will be useful for graduate students and researchers working in algebra, geometry, and topology." (Oleg V. Belegradek, Zentralblatt MATH, Vol. 1013, 2003)