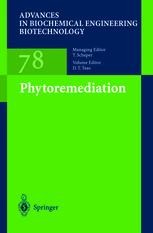 The environmental clean up industry has been estimated as having an annual turnover of $50 billion globally. With new regulations being written on addi tional chemicals that are just, now, becoming understood from a toxicological and environmental risk standpoint, this industry could expand even further. This is particularly true as more nations become industrialized. Typical conta minants that are of concern include agricultural byproducts, municipal wastes, industrial solvents, petroleum hydrocarbons, heavy metals, pesticides, radioac tive wastes, munitions, and other man made products. In order to treat and remediate these contaminants, practioners have several "tools" in the remediation "toolbox" including physical, chemical, and biological methods. One relatively new biological method that has been applied to address various environmental concerns is phytotechnologies. The method is defined as the use of vegetation to contain, sequester, remove, or degrade inorganic and organic contaminants in soils, sediments, surface waters, and groundwater. Although its roots were developed from other disciplines such as agronomy, agricultural engineering, chemical engineering, forestry, horticulture, hydroge ology, and microbiology, this set of technologies has grown substantially on its own in understanding of and application in the environmental clean up indus try around the world.