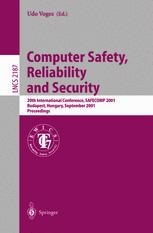 This year we celebrated another anniversary: after 20 years of SAFECOMP in 1999, th this was the 20 SAFECOMP since its inauguration in 1979. This series of events focuses on critical computer applications. It is intended to be a platform for knowledge transfer between academia, industry, and research institutions. Papers are solicited on all aspects of computer systems in which safety, reliability, and security (applied to safety in terms of integrity and availability) are of importance. The 20th SAFECOMP tried to cover new grounds, both thematically and geographically. The previous 19 SAFECOMPs were held in Austria (1989, 1996), France (1987, 1999), Germany (1979, 1988, 1998), Great Britain (1983, 1986, 1990, 1997), Italy (1985, 1995), Norway (1991), Poland (1993), Switzerland (1992), The th Netherlands (2000), and in the USA (1981, 1992), whereas the 20 was held in Hungary. Authors from 13 countries responded to the Call for Papers, and 10 countries were represented in the final program. The proceedings include 20 papers plus 3 invited papers, covering the areas Reliability Assessment and Security, Safety Case and Safety Analysis, Testing, Formal Methods, Control Systems, and this year covering new grounds with a special emphasis on Human Machine Interface, Components off the Shelf, and Medical Systems.