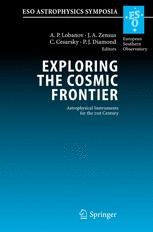 Astrophysical Instruments for the 21st Century

In the coming decades, astrophysical science will benefit enormously from the construction and operation of several major international ground- and space based facilities, such as ALMA, Herschel/Planck, and SKA in the far infrared to radio band, Extremely Large Telescopes, JWST and GAIA in the optical to near infrared regime, XEUS and Constellation-X in the X-ray, and GLAST in the Gamma-ray regime. These and other new instruments will have a major impact in a wide range of scientific topics including the cosmological epoch of reionization, galactic dynamics and nuclear activity, stellar astronomy, extra-solar planets, gamma-ray bursts, X-ray binaries, and many others.

On May 18-21, 2004, the Max-Planck-Society’s Harnack-Haus in Dahlem, Berlin hosted the international symposium "Exploring the Cosmic Frontier: Astrophysical Instruments for the 21st Century". The symposium in Berlin was dedicated to exploring the complementarity and synergies between different branches of astrophysical research, by presenting and discussing the fundamental scientific problems that will be addressed by major future astrophysical facilities in the next few decades.

This book contains 70 papers from the meeting and is intended to give a lasting account of a snapshot of an evolving scientific discourse and interaction throughout our field of research.

"This collection of 70 papers is the proceedings of a symposium by the same name, hosted by the Max-Plank-Society in Berlin in May 2004. … Many of the papers have good lists of references, including web sites. … the assumed familiarity of the specific subjects and the technical level of the papers will confine readership to graduate students and researchers in astrophysical and related fields." (John A Kennewell, Australian Physics, Vol. 44 (2), 2007)