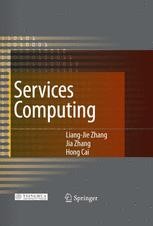 As the core technical foundation for the modern services science, Services Computing covers the science, technology and business models of effectively creating and leveraging computing technology to bridge the gap between business and IT services. This book systematically introduces the fundamentals of this new discipline based on the latest research results in web services and Service-Oriented Architecture (SOA); business consulting methodology and utilities; business process modeling, transformation, integration, and management; and services as software, software as service, and Web 2.0 for effective services delivery. Major solution architectures, technologies and research methods are discussed in the lifecycle of services innovation research. This book provides readers with new research and solution methods to better create and manage business services, which is the goal of Services Computing.

Dr. Liang-Jie Zhang was the Chief Architect of Industrial Standards at IBM Software Group from 2004 to 2005, and is the current leader of an IBM SOA solution design and modeling tool and the co-leader of an IBM-wide SOA Solution Stack project. He is the father of Services Computing.

In 2004 and 2005, Dr. Zhang was appointed as the Chief Architect of Industrial Standards at IBM Software Group. In this position, he was playing leadership role in helping define IBM’s strategy for industrial standards and open architecture for service-oriented business solutions. He was also invited by the Chief Technology Officer and VP of IBM Global Industrial Sector to define the technical strategy for the Global Industrial Sector at IBM Sales and Distribution (S&D).

Dr. Zhang is one of the leading pioneers in the field of Service-Oriented Architecture (SOA) and Web Services. Dr. Zhang was the lead inventor and architect of Business Explorer for Web Services (BE4WS, http://www.alphaworks.ibm.com/tech/be4ws), WSIL Explorer (part of IBM Emerging Technologies Toolkit), and Web Services Outsourcing Manager (WSOM, http://www.alphaworks.ibm.com/tech/wsom), all released by IBM alphaWorks. He led a team from IBM Research and Software Group to create the first comprehensive Web services-based Managed E-Hub to enable services provisioning and business on-boarding for supporting business process on demand.

Dr. Zhang and his team invented non-intrusive hyperlink indicators for interactive video in 1996 and interactive digital TV commerce system in 1999. These inventions have laid a solid foundation for today’s IPTV industry. From product impact perspectives, he was a lead inventor and architect of the following IBM rich media for e-business products: HotVideo (http://www.alphaworks.ibm.com/tech/hotvideo) and HotAudio. Then he became a member of the core architect team of the supported HotMedia product (http://www.ibm.com/hotmedia) and the lead architect of Interactive digital TV commerce solution in IBM Software Group. HotMedia was part of the IBM WebSphere Commerce Suite for creating rich media-enabled catalogs and transactions. Dr. Zhang had been leading the technical aspects of the technology commercialization process from his invention to IBM HotMedia and IBM HotMedia TV products for 3 years in this effort.

He was presented with the IBM "Outstanding Technical Achievement Award" for HotMedia Architecture in 1999. IBM HotMedia was awarded the CNET/PC Expo's "Best of Show Software Award" in 2000. He received IBM First/Second/Third/Fourth/Fifth/Sixth/Seventh Plateau Creative Contribution Award in 1999, 2000, 2001, 2002, 2002, 2003, and 2003 respectively. He was also presented with "The Who's Who New Century Medal" in 2000. Recently, he was presented with "The Outstanding Achievement Award" by the World Academy of Sciences in 2003 for his research contribution to the field of Web services and to the 2003 International Conference on Web Services (ICWS’03). Dr. Zhang received the Innovation Leadership Award (for his outstanding contributions to Services Computing and IPTV Commerce) presented by the Chinese Institute of Electronics and E-Business Summit 2006 in March 2006.

Dr. Zhang has more than 30 patents worldwide (11 US patents) in the areas of Web services, e-commerce, rich media, data management, and information appliances. He has published more than 80 technical papers in Journals, Book Chapters, and Conference Proceedings.