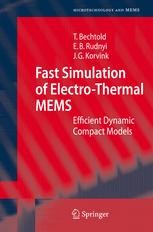 Fast Simulation of Electro-Thermal MEMS provides the reader with a complete methodology and software environment for creating efficient dynamic compact models for electro-thermal MEMS devices. It supplies the basic knowledge and understanding for using model order reduction at the engineering level. Emphasis is placed on the application of the Arnoldi method for effective order reduction of thermal systems. This tutorial is written for MEMS engineers and is enriched with many case studies which equip readers with the know-how to facilitate the simulation of a specific problem.

Tamara Bechtold earned her Dipl.-Ing. degree in electrical engineering and microsystem technology at the University of Bremen, Germany in 2000 and her Dr. Ing. in microsystem simulation at the Institute of Microsystem Technology (IMTEK) in Freiburg, Germany in 2005. Currently, she is working at IMTEK as a post-doctoral researcher. Her research interests include the application of model order reduction to MEMS problems and their efficient system-level simulation.

Evgenii B. Rudnyi graduated from Moscow State University (MSU), Department of Chemistry in 1981, diploma (equiv. M.Sc.) in Chemistry. He received the Candidate of Science (equiv. Ph.D.) degree in physical chemistry in 1985. Dr. Rudnyi was a Research worker, Assistant Professor, and Associated Professor at the Chemistry Department of MSU from 1985 to 2000 and a guest scientist at the National Institute of Standards and Technology (USA) in 1991. Currently, he is working at the Institute of Microsystem Technology (IMTEK) in Freiburg, Germany, as a senior scientist. He is actively involved in the application of model reduction to MEMS problems. He is an author of software mor4ansys that performs model reduction directly for ANSYS models.

Jan G. Korvink earned his Master of Science in computational mechanics at the University of Cape Town, South Africa and read his doctorate at the Swiss Federal Institute of Technology (ETH) in Zurich (Dr. sc. techn. in applied computer science). After he had built up and lead the Microsystem Modeling Group at the Physical Electronics Laboratory, Institute for Quantum Electronics at the ETH he was called upon to join IMTEK (Institute for Microsystem Technology) at the Albert Ludwig University of Freiburg, Germany to hold the Chair of Microsystem Simulation. He is now a vice-dean and chairman of the examination board at the Faculty of Applied Sciences to which IMTEK belongs. Prof. Korvink is author or co-author of more than 130 publications in the field of microsystems and joint-editor of "Advanced Micro and Nanosystems" [http://www.wiley-vch.de/books/info/amn]. Prof. Korvink is a member of the technical programe committees of several conferences and is a member of ASME. He has been visiting professor at the ETH Zurich, the Ritsumeikan University of Kusatsu, Japan and visiting scientist at the Kyoto University in Kyoto, Japan. His research activities focus on the development of ultra low-cost methods of MEMS production and the modeling for and simulation of micro- and nanosystems.