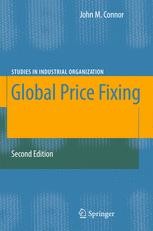 The book describes and analyzes the formation, operation, and impacts of modern global cartels. It provides a broad picture of the economics, competition law and history of international price fixing. A deeper understanding of the phenomenon is afforded by intensive case studies of collusion in the markets for lysine, citric acid, and vitamins. Particular attention is given to the economic injuries sustained by the cartels' customers. The author assesses whether antitrust enforcement by the European Union, the United States, and other countries is capable of deterring cartels in the foreseeable future.

From the review of the second edition by Valerie Y. Suslow, University of Michigan, published in: Journal of Economic Literature Vol. 47 (June 2009): 527-529

[…] John Connor’s book, Global Price Fixing, an updated and revised second edition, is an in depth look at the organization, mechanisms of operation, behavior, and effects of three famous international cartels in the citric acid, lysine, and vitamins industries. Empirical researchers often focus on "international cartels"—those with members from two or more countries. Connor focuses on "global cartels," which he defines as "conspiracies that bridge two or more continents" (p. 5). […]

The scope of the book is wide-ranging, addressing the economics of cartel operation for these three in-depth cases, but at the same time offering an overview of the policy issues as well as commentary on recent developments. Not surprisingly, there is much to bring up to date because "[m]uch has happened in the field of cartels since the first edition was written in 2000" (p. viii). Although the organization of the book is substantially the same, the focus has broadened. […]

Global Price Fixing continues to be an invaluable reference for those with a deep interest in the economics of cartels, and a very readable and accessible narrative on the stories behind three famous contemporary international cartels. Given the apparent continued proclivity of firms to conspire to fix prices and allocate markets, these stories will continue to be relevant for researchers and policymakers for years to come.

From reviews of the first edition:

"Since 1994, more than 20 global cartels have been discovered … . John Connor has written an immense and marvelous book on the subject. He says … that his goal is ‘to describe and analyze the origins, operation and impact of global cartels in the markets for lysine, citric acid, and vitamins’. He succeeds nicely in this goal … . Connors writes in an appealing narrative or journalistic style … . it should become a basic resource for almost everyone interested in industrial organization economics." (Prof. Douglas Greer, Review of Industrial Organization, Vol. 21, 2002)