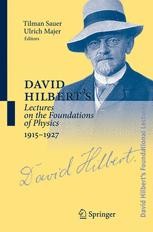 David Hilbert's Lectures on the Foundations of Physics 1915-1927

Volume 5 has three parts, dealing with General Relativity, Epistemological Issues, and Quantum Mechanics. The core of the first part is Hilbert’s two semester lecture course on ‘The Foundations of Physics’ (1916/17). This is framed by Hilbert’s published ‘First and Second Communications’ on the ‘Foundations of Physics’ (1915, 1917) and by a selection of documents dealing with more specific topics like ‘The Principle of Causality’ or a lecture on the new concepts of space and time held in Bucharest in 1918. The epistemological issues concern the intricate relation between nature and mathematical knowledge, in particular the question of irreversibility and objectivity (1921) as well as the subtle question whether what Hilbert calls the ‘world equations’ are physically complete (1923). The last part deals with quantum theory in its early, advanced and mature stages. Hilbert held lecture courses on the mathematical foundations of quantum theory twice, before and after the breakthrough in 1926. These documents bear witness to one of the most dramatic changes in the foundations of science.

“This is one volume of an ambitious project to publish David Hilbert’s lectures on the foundations of mathematics and physics, 1891–1933. … The upshot is a wonderful resource making possible new scholarship on Hilbert as a highly interesting philosopher of physics and epistemologist. … Philosophers of physics and those with interests in early twentieth-century HOPOS will find in this book an irresistible invitation to explore Hilbert as philosopher of physics and epistemologist.” (Katherine Brading, Metascience, October, 2013)

“This is the second volume published in the meritorious selection from Hilbert’s unpublished lecture notes of courses on the foundations of mathematics and physics … . The volume is completed by several tools that make access to the material easier: a complete list of Hilbert’s lecture … and an index of names and subjects. … an excellent volume that perfectly fulfils the editor’s desire ‘to bring out the significance and potential of Hilbert’s contributions to the foundations of physics in all their aspects’ … .”­­­ (Volker Peckhaus, Mathematical Reviews, Issue 2011 c)

“This splendidly edited and rich volume sets a remarkable store of Hilbert’s ideas before the public … . The book and each of its six chapters have excellent introductions by the editors … have taken the sensible decision to leave Hilbert’s text in its original German. … they have judged that the best (a translation) would have been the enemy of the good (a well edited book that actually exists) and for choosing the good, and much else, we should thank them.” (Jeremy J. Gray, The Mathematical Association of America, March, 2010)

“David Hilbert (1862-1943) was an outstanding mathematician whose Gesammelte Abhandlungen (Collected Works) were published during his lifetime, between 1932 and 1935 in three volumes. … this volume inhabits a place somewhere between a definitive critical history and a student edition, although readers of this beautifully printed and well bound book will no doubt appreciate having some important and interesting papers by Hilbert between its covers.” (Rüdiger Thiele, Zentralblatt MATH, Vol. 1190, 2010)