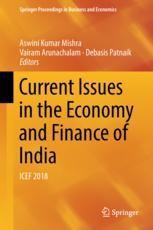 Current Issues in the Economy and Finance of India

This proceedings volume highlights important points of achieving a balanced and sustained growth path from diverse economics and finance perspectives, touching on a wide array of economic and social analyses in India. Featuring contributions presented at the 2018 International Conference on Economics and Finance (ICEF-2018) held at the Birla Institute of Technology and Science, Pilani, Goa, India, the enclosed papers explore topics such as inflation dynamics, information transmission in post-recession era, leverage effect and volatility asymmetry, structural change and economic growth and reforming tax systems, among others.

The Indian economy today is remarkable and, not surprisingly, it is growing very rapidly. It has emerged as the fastest growing major economy in the world as per the Central Statistical Organization (CSO) and International Monetary Fund (IMF) and it is expected to be one of the top three economic powers of the world over the next 10 to15 years, backed by its strong democracy and partnership. At the backdrop of impressive progress of the Indian economy during the last two decades, the question that remains to be answered is does India still have a long way to go before it is functioning well as a market economy? This book critically examines the performance of the Indian economy at the national, state and sectorial levels. Featuring contributions from leading academicians, scholars and practitioners from Asia and the rest of the world, this book is an asset to students, professors, scholars, practitioners and policy makers in the areas of India economics, finance and sustainable development.
Show all