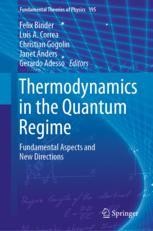 Thermodynamics in the Quantum Regime

Quantum Thermodynamics is a novel research field which explores the emergence of thermodynamics from quantum theory and addresses thermodynamic phenomena which appear in finite-size, non-equilibrium and finite-time contexts. Blending together elements from open quantum systems, statistical mechanics, quantum many-body physics, and  quantum information theory, it pinpoints thermodynamic advantages and barriers emerging from genuinely quantum properties such as quantum coherence and correlations. Owing to recent experimental efforts, the field is moving quickly towards practical applications, such as nano-scale heat devices, or thermodynamically optimised protocols for emergent quantum technologies.

Starting from the basics, the present volume reviews some of the most recent developments, as well as some of the most important open problems in quantum thermodynamics. The self-contained chapters provide concise and topical introductions to researchers who are new to the field. Experts will find them useful as a reference for the current state-of-the-art. In six sections the book covers topics such as quantum heat engines and refrigerators, fluctuation theorems, the emergence of thermodynamic equilibrium, thermodynamics of strongly coupled systems, as well as various information theoretic approaches including Landauer's principle and thermal operations. It concludes with a section dedicated to recent quantum thermodynamics experiments and experimental prospects on a variety of platforms ranging from cold atoms to photonic systems, and NV centres.

This book has been written by over 100 internationally recognized experts in this novel research field. They were invited by the editors based on their expertise. The editors are as follows:

Dr. Felix Binder is an expert on quantum information theoretic approaches to
thermodynamics and also studies quantum models for stochastic processes as well asquantum correlations. He obtained his DPhil from the University of Oxford and currentlyworks as a research fellow at Nanyang Technological University in Singapore.
Dr. Luis A. Correa is an expert on open quantum systems interested in the performanceoptimisation of quantum thermodynamic cycles (e.g. nano-scale refrigerators and quantumheat engines). He is also interested in quantum thermometry, or the precise measurementof ultra-cold temperatures with nano-scale spatial resolution.
Dr. Christian Gogolin is an expert on equilibration and thermalization in closed quantumsystems and has worked on a broad range of topics in quantum many-body andcondensed matter theory, quantum information theory, statistical mechanics, foundations ofquantum mechanics, and several others.
Dr. Janet Anders is an expert in the characterisation of work in the quantum regime andthermodynamic experiments at the microscale. She has worked on topics in quantuminformation theory and quantum thermodynamics, including quantum computation,entanglement in quantum many-body systems, thermodynamics in the strong couplinglimit, and non-equilibrium dynamics of levitated nanospheres.
Prof. Gerardo Adesso is an expert on quantum information theory and the characterisationof nonclassical correlations in open quantum systems, including their mathematicaldescription and their practical applications to quantum technologies such as cooling,thermometry, optical communication, sensing and metrology.
Show all