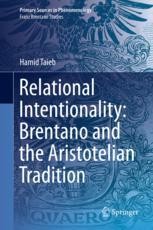 This book sheds new light on the history of the philosophically crucial notion of intentionality, which accounts for one of the most distinctive aspects of our mental life: the fact that our thoughts are about objects. Intentionality is often described as a certain kind of relation. Focusing on Franz Brentano, who introduced the notion into contemporary philosophy, and on the Aristotelian tradition, which was Brentano’s main source of inspiration, the book reveals a rich history of debate on precisely the relational nature of intentionality. It shows that Brentano and the Aristotelian authors from which he drew not only addressed the question whether intentionality is a relation, but also devoted extensive discussions to what kind of relation it is, if any.

The book aims to show that Brentano distinguishes the intentional relation from two other relations with which it might be confused, namely, causality and reference, which also hold between thoughts and their objects. Intentionality accounts for the aboutness of a thought; causality, by contrast, explains how the thought is generated, and reference, understood as a sort of similarity, occurs when the object towards which the thought is directed exists. Brentano claims to find some anticipation of his views in Aristotle. This book argues that, whether or not Brentano’s interpretation of Aristotle is correct, his claim is true of the Aristotelian tradition as a whole, since followers of Aristotle more or less explicitly made some or all of Brentano’s distinctions. This is demonstrated through examination of some major figures of the Aristotelian tradition (broadly understood), including Alexander of Aphrodisias, the Neoplatonic commentators, Thomas Aquinas, Duns Scotus, and Francisco Suárez.

This book combines a longue durée approach – focusing on the long-term evolution of philosophical concepts rather than restricting itself to a specific author or period – with systematic analysis in the history of philosophy. By studying Brentano and the Aristotelian authors with theoretical sensitivity, it also aims to contribute to our understanding of intentionality and cognate features of the mind.
Show all
About the authors

Hamid Taieb is a postdoctoral researcher at the University of Salzburg. He works on Austro-German philosophy, mostly on the school of Brentano. His research interests also include the Aristotelian tradition, especially Latin scholasticism.

“The remarkable and exhaustive amount of work carried out by Taieb makes this publication extremely relevant. The uniqueness of the inquiry results in an excellent and thoughtful piece of work, opening up a fruitful area of research yet to be explored. … It can undoubtedly be of interest to all those concerned with intentionality, whether they are historians, phenomenologists or philosophers of mind.” (Marco Coratolo, Phenomenological Reviews, January 6, 2020)

“Taieb’s book is erudite and insightful. As it wonderfully combines historical reconstruction with rational analysis, historians of philosophy and philosophers would benefit a great deal from studying it.” (Andrea Marchesi, British Journal for the History of Philosophy, March 28, 2019)